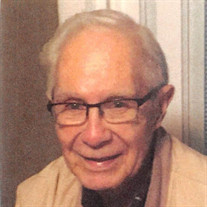 Manuel Gonzales, 93, of Cheyenne, Wyoming, passed away peacefully on November 30, 2021, at Davis Hospice Center surrounded by his family. Manuel was born on September 11, 1928, in Chacon, New Mexico to Jose and Beroniz Gonzales. He married the love of his life, Martha Abeyta, on April 16, 1960 in Rawlins, Wyoming. One of Manuel's proudest achievements was his education. He graduated from Menaul High School, a private college preparatory school in Albuquerque, New Mexico. He later received his Bachelor's Degree in Education from the University of New Mexico and a Master's Degree in Social Work from the University of Nebraska. In between his college years, he served two years in the United States Army during the Korean Conflict. Manuel was the first Hispanic social worker hired in Laramie County for the Department of Welfare in 1960 and later moved on to work as the head of the Child Development Program for the State of Wyoming Department of Health and Social Services, retiring in 1987. Manuel was a member of First United Methodist Church since 1977, a lifetime member of the Latin American Association, as well as the VFW Post #1881 and an avid pool player with the Valley Pool League well into his golden years. He will be remembered as a modest, kind and compassionate person, not only to family and friends, but also by many in need in the community. He was particularly helpful with providing translation services from English to Spanish or vice versa. Manuel was preceded in death by his parents; brothers, Levi and William; and sister, Mary Allie. He is survived by his wife, Martha; three children, Shirley Gonzales and Paul Gonzales of Cheyenne, and Susan Cook of Honolulu, Hawaii; grandchildren and great-grandchildren, Franco, Amber, Benjamin, Noa, Christos, Alyvia, Cooper, Moises and Mateyah. A Celebration of Life will be held on June 25, 2022, at 2:00 p.m., at Wiederspahn-Radomsky Chapel with refreshments to follow at The Gathering Place, directly across the street. In lieu of flowers, donations can be made to Davis Hospice Center in Cheyenne in his memory.

Manuel Gonzales, 93, of Cheyenne, Wyoming, passed away peacefully on November 30, 2021, at Davis Hospice Center surrounded by his family. Manuel was born on September 11, 1928, in Chacon, New Mexico to Jose and Beroniz Gonzales. He married... View Obituary & Service Information

The family of Manuel Gonzales created this Life Tributes page to make it easy to share your memories.

Send flowers to the Gonzales family.