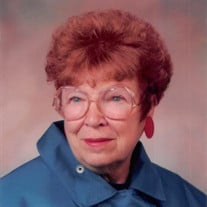 Lorraine Elizabeth (Forister) Grigsby, 98, passed away at home, on August 31, 2021, surrounded by her loving family. Lorraine was born December 7, 1922, in Milwaukee, Wisconsin, to Josephine T. (Henn) Forister and Dr. Harry M. Forister, DDS. Lorraine graduated from Cheyenne High – class of 1940. She earned advanced degrees in business from Colorado Women’s College and the University of Colorado in 1946 and a Master’s degree in Adult Education, Counseling and Guidance from the University of Wyoming in 1970. After training in Chicago, Lorraine owned and operated Lorraine’s Floral Company in Cheyenne from 1946-1949. In 1950 she began her civil service career with F.E. Warren Air Force Base. After three years she would move to the Education Office, and complete 33 years of service to the military employees and their families. She earned accolades for her department including Best Education Services Program within the Strategic Air Command, and annually served 5,000 military personnel with 400 course offerings ensuring that all the military service people assigned to the base had a degree, ranging from G.E.D. to PhD. Following her Education Officer career, Lorraine earned certification as a Realtor and worked for Coldwell Banker-First Team and the Herman Group, earning Top Listing Agent, Top Selling Agent and Million Dollar Agent recognition. She married Noice R. Grigsby Jr. in September, 1950, and they had a son, Gary N. Grigsby in July, 1951. She took pleasure from knowing that her passion for education was passed to her son who earned degrees from two of her favorite institutions, the University of Wyoming and Colorado State University. As a family they were involved in the raising, training, breeding, and racing of thoroughbreds and quarter horses. She attended the Kentucky Derby numerous times and had a real instinct for picking winners. Lorraine was President of the Wyoming Thoroughbred Breeders Association for many years. Lorraine was active in numerous organizations at the local and state level, notably the American Association of University Women, Gamma Phi Beta, and Cowgirls of the West. She was the 2009 honoree for the Cowgirls of the West. Lorraine was fortunate to have a close relationship with many friends. Lorraine was preceded in death by her parents, Josephine and Harry Forister, sister, Virginia (Forister) Wallin, and Noice R. Grigsby Jr.. She is survived by Gary (Marca) Grigsby, Stacy Cenedese, Tammy (Tom) Nowak, Karen (Dennis) Bell, Mr. and Ms. Mark Teaque, Mike (Eileen) Forister, Lana (Mike) Mabee, and Chris (Katy) Yaney and their families. Wiederspahn Radomsky is assisting the family with arrangements and there will be a Mass at St. Mary’s Cathedral, Wednesday, September 8, 2021, at 2:00 p.m. To send the family condolences please visit www.wrcfuneral.com

The family of Lorraine Elizabeth (Forister) Grigsby created this Life Tributes page to make it easy to share your memories.

Send flowers to the Grigsby family.