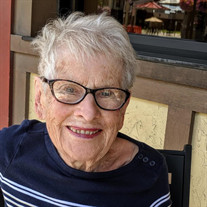 Lois Hibbler, 90, passed away peacefully on September 20, 2020, in Cheyanne, WY. Lois is survived by her three sons, Fritz (Shelley) Hibbler, Jim Hibbler, Bill Hibbler, and her three grandchildren, Rory, Will and Helmut, and her four step-grandchildren, Jake Childs, Mackenzie Childs, Madison Childs and Nick Childs. Lois Maxine Bublitz was born on May 3, 1930, in Bay City, MI, to Laura Clara (Patzwaldt) and Ernst Gustav Johann Bublitz. Lois was a member of the Immanuel Lutheran Church and graduated from Bay City Central in the Class of '48, where she made life-long friends who would later become the Potluck Club. With the help of the future Potluck Club, Lois married Gene Hibbler on October 28, 1950. They were married for 63 playful years before Gene's passing on January 3, 2011. In 1957, Lois and Gene moved from Bay City to Owosso, MI, where she raised three boys, was an active member of Salem Lutheran Church, and continued her career in banking. Lois's started her career as a Proof Operator for People's National Bank & Trust Company. She was promoted to an Assistant Cashier at the Owosso Savings Bank and retired as a Second Vice President for Old Kent Bank. During her career, Lois treated every customer as a friend even though she encountered workplace pay inequity and discrimination. Because of her high-standards, work ethic and personality, Lois threw her career against the glass ceiling until it cracked just a little bit. Hoping her grandkids' generation can shatter it. After retiring, Lois and Gene moved to Gaylord, Michigan, where she was a devoted member of Our Savior Lutheran Church and an active member of the Michaywé community. Lois was everyone's friend. She was a breast-cancer survivor, a proud grandmother, and a community volunteer. She especially liked volunteering at the Gaylord and Michaywé Art Festivals. Lois enjoyed gardening, any Michigan-Michigan State sporting event, decorating, golfing, sewing and partying with all of her friends. If you would like to honor Lois's memory, plant some flowers, volunteer your time, make something pretty, treat everyone with respect, help shatter the glass ceiling, eat a bowl of ice cream, raise your glass in a tribute to her life and praise God.

Lois Hibbler, 90, passed away peacefully on September 20, 2020, in Cheyanne, WY. Lois is survived by her three sons, Fritz (Shelley) Hibbler, Jim Hibbler, Bill Hibbler, and her three grandchildren, Rory, Will and Helmut, and her four step-grandchildren,... View Obituary & Service Information

The family of Lois Hibbler created this Life Tributes page to make it easy to share your memories.

Send flowers to the Hibbler family.