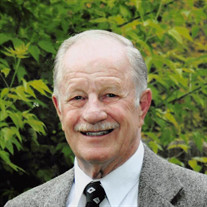 Lloyd Allen Eisenhauer, 91 of Cheyenne, Wyoming passed away peacefully on May 20, 2022, in Cheyenne. He was born August 6, 1930, in Wallace, Nebraska, to William “Harry” and Truly (Padgett) Eisenhauer. He was the fourth oldest of seven boys: Don, Delbert, Bob, Tom, Howard and Loren. In 1942 the Eisenhauer family moved from Wallace, NE to Pine Bluffs, WY where he graduated from Pine Bluffs high school in 1948. At the age of 17, he and his older brother Bob both enlisted in the United States Marine Corp serving from 1948-1952 during the Korean War. After serving in the USMC Lloyd owned a livestock business from 1952-1958. In 1958 he enrolled in college at the University of Wyoming earning his bachelor’s degree 1962. He was then hired by the Bureau of Land Management, most of his work focused on grazing management involving sheep, cattle, and wild horses. On December 18, 1965, Lloyd and Irene Medina married in Rawlins, WY. They raised their family in Wyoming, New Mexico, and Colorado. Lloyd returned to Cheyenne in 1982 and became the Head of Automation in BLM’s Cheyenne office. He retired in 1986, but stayed very involved in the issues of wild horse and livestock management on BLM lands in Wyoming. After Irene’s passing in 2004, he married Betty Janicek in 2007 and was welcomed by her loving family. Lloyd enjoyed family gatherings, camping, fishing, and hunting in the great outdoors. He is survived by – his five children Rodney Eisenhauer, Tracy Martinez, Stephen “Kelly” and Melody Roberts, Mark Eisenhauer, and Marcy Eisenhauer; several grandchildren, great-grandchildren, and great-great grandchildren. His three brothers and sisters-in-laws, Tom and Mary Ann, Howard and Karin, Loren and Linda, and Jean Eisenhauer; as well as many nieces and nephews. Lloyd was preceded in death by – his loving wives Irene (2004); and Betty (2016); his parents Harry and Truly Eisenhauer; brothers Don, Robert, Delbert and sister-in-law Gerry Eisenhauer; nephews John, Donn, and Richard Eisenhauer. Services will be Saturday, June 25th, 10:00 a.m., at Wiederspahn-Radomsky Chapel.

The family of Lloyd Allen Eisenhauer created this Life Tributes page to make it easy to share your memories.

Send flowers to the Eisenhauer family.