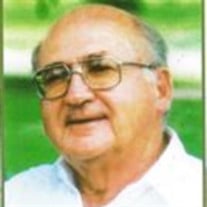 Lewis C. Lepore passed away on May 7th, 2022, peacefully, surrounded by loved ones. He was 91. Lew was born to Joseph P. and Mary Lepore on November 16th, 1930, in West Pittston Pennsylvania. Golf was always the biggest part of his life even though he accepted a scholarship to play football out of high school at Texas-El Paso. Realizing that wasn’t for him, Lew returned to Pennsylvania to continue his college career. In 1950, Lew enlisted into the Air Force and came to Cheyenne serving at Warren Air Force Base until his discharge in 1954. After his military service, Lew went back to school at the University of Wyoming where he was a multiple letter winner for the golf team and earned his degree in education with honors in 1957. After college, Lew began his career as a teacher with Laramie County School District 1. He taught and coached 5th and 6th graders at Cole Elementary and finished his 29-year career at Carey Junior High teaching physical education. Lew played a part in starting the high school golf program at Central High School in the late 50’s and early 60’s. He was a major influence in bringing a state high school golf championship to Wyoming. While coaching golf at East High, Lew’s teams won two state championships in the mid 70’s. While teaching, Lew accepted the position as the golf professional at the Airport Golf Club in 1965. It was shortly thereafter when he took over duties at the new 9-hole course Kingham Prairie View as well. Lew was instrumental in building the current clubhouse at the Airport course and in 1998, designed and financed the new clubhouse building at Kingham Prairie View. Lew held the position for 57 years and was a proud member of the Colorado Section of the Professional Golfers Association for 50 years. One of Lew’s biggest contributions to the golfing community in Cheyenne was his work in building the Wyoming State Open Golf Tournament. He brought the tournament from its initial purse of $500.00 in 1957 to this year’s professional purse of $50,000 and has helped to bring some of golf’s future stars to Cheyenne. For his work in golf, Lew was elected to the Wyoming Sports Hall of Fame in 2005 and The Wyoming State Golf Association Hall of Fame in 2007. He received the Warren Smith Award from the Colorado Section of the Professional Golfers Association of America in 1992. The High School Golf Player of the Year award from the Wyoming Coaches Association is named in his honor. Lew was also a two-time Wyoming State Amateur Champion. Lew was preceded in death by his wife of 56 years Kay, his parents Joseph and Mary, his brothers Joseph A and Anthony, sisters Mary, Theresa, and Florence Lepore, Elizabeth Mattina, Margaret Maryovich and Madeline White. He is survived by his sweetheart Betty Frank, his sons Kevin (Amy) and Michael, and daughter- in- law Kim, three grandchildren (Dave, Nick, and Chassidy) and 6 great grandchildren (Lexie, Izzabelle, Briana, Heaven, Brooklyn, and Emelia). No services will be held. A celebration of life will take place on Saturday July 9th at 6.00 PM at the Airport Golf Club. In lieu of flowers, please consider a donation to the Wyoming State Open Golf Tournament or The Airport Golf Club Scholarship Fund at PO Box 62, Cheyenne 82003.

Lewis C. Lepore passed away on May 7th, 2022, peacefully, surrounded by loved ones. He was 91. Lew was born to Joseph P. and Mary Lepore on November 16th, 1930, in West Pittston Pennsylvania. Golf was always the biggest part of his life even... View Obituary & Service Information

The family of Lewis C. Lepore created this Life Tributes page to make it easy to share your memories.

Send flowers to the Lepore family.