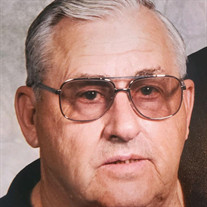 Leslie L. Bridwell, 90 of Cheyenne, passed away peacefully at his residence Whispering Chase, June 10, 20212 in Cheyenne, Wyoming. He was born on May 4, 1931 in Edgar, Nebraska to Charley and Bertha (Gillispie) Bridwell, he was the sixth of eight children. Mr. Bridwell grew up in Windsor, Colorado and worked for several farmers. In 1946, he went to visit his sister Helen in Cheyenne; went to work for Skaggs Grocery Store; and lived most of hos life in Cheyenne. He married Joan Stahlnecker on June 11, 1950. Les served in Korea. He and Joan lived in Cheyenne and he worked for Safeway for many years. They had two daughters: Nancy and Sandy. Les worked for Gerber Baby Foods for over 30 years, retiring in the fall of 1992. Leslie received the Army’s “Commendation Ribbon with Metal Pendant” for Meritorious Service in Korea, July 1953 – Jan 1954 during a special presentation in 2004. At this time, he also received his Windsor High School Diploma. Les loved his family, fishing and was known by all for his famous jokes. He was a great friend to many but especially an adoring, loving grandfather and “father” to his grandchildren. He is survived by daughter: Sandra Juoni of Cheyenne, grandchildren: Tracy Baird of Cheyenne, Kara Pippin of North Carolina, Debra Passaro of Cheyenne, Jered Hill of North Carolina; great- grandchildren: Dashay Hunt, Destiny Davison, Jacob and Caleb Pippin, Sierra Moore, Devan Baird and Jordan Marshall. Les is also survived by many nieces and nephews and special friends. Mr. Bridwell was preceded in death by his wife Joan of 65 years, his daughter Nancy, his parents, brothers: LaVerne, Melvin, Donald, Robert, and Wayne; sisters: Betty and Helen. Services and military honors will be Tuesday 10:00 a.m., and Wiederspahn- Radomsky Chapel. In lieu of flowers, donations may be made to: Military Memorial Museum, 1717 Carey Ave., Cheyenne, Wyoming 82001.

Leslie L. Bridwell, 90 of Cheyenne, passed away peacefully at his residence Whispering Chase, June 10, 20212 in Cheyenne, Wyoming. He was born on May 4, 1931 in Edgar, Nebraska to Charley and Bertha (Gillispie) Bridwell, he was the sixth of... View Obituary & Service Information

The family of Leslie Bridwell created this Life Tributes page to make it easy to share your memories.

Leslie L. Bridwell, 90 of Cheyenne, passed away peacefully at...

Send flowers to the Bridwell family.