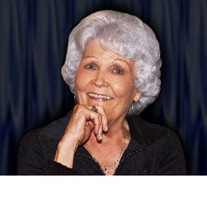 Heaven gained a precious angel October 16, 2020, when God called Leona Rose Ostrom home to eternal paradise. Leona was born June 10, 1929 to Christina Nielson Essley and Roy Elmer Essley on the family farm in rural Custer County, Nebraska. Leona was the third of six children. Her siblings were Edna, Dwain, Norma, Viola (Vi) and Barb. Leona and Donald Ostrom met when they were children in Nebraska. After Don returned from serving in the Army during World War II, they fell in love and married September 19, 1947 in Vancouver, Washington. Leona and Don had three children, Deborah (Debbie), Connie and Ronald (Ron). Her first job was a phone operator in North Platte and later in Eugene, Oregon. In 1957 Leona and Don moved to Cheyenne where Don worked for Greyhound Bus Lines. After their children were in school, Leona worked at Cheyenne Safeway stores in the meat and deli departments. Leona worshipped at North Christian Church where she shared her faith with many dear friends. A very giving and caring person, Leona loved to take care of and dote over others. She readily brought new friends – who became lifelong friends – into her and her family’s lives. Everyone was always welcome in Leona’s world. Her family came first and she always had time to listen. Widely-known and appreciated for her culinary skills, Leona was always baking and sharing her cookies with many people in town and mailing them to those far away. Leona loved having all her family near and Ostrom – Essley family gatherings were held throughout the year and for several days each time. Laughter consistently flowed during family gatherings and Leona’s family was her best friends. Leona was preceded in death by her parents, her husband Don, daughter Debbie Welsh, siblings Edna and Henry Meredith, Dwain Essley, Norma Milligan, Jerry Lester and companion Roy Montgomery. Leona is survived by her children Connie and Ron, Ron’s wife, Laurie, and their children, Aaron and Jennifer; Debbie’s sons and their wives, Sean and Jana, Kyle and Wendy, Bryan and Nici; great-grandchildren Dustin, Taylor, Mickayla and Kaleb; sisters Vi Lester, Barb and Dale Childerston, sister-in-law Grace Essley; daughter-by-heart Donelle Bainter Manton, many other loving family members, friends and her faithful dog Ginger – her “little baby girl.” Leona will be buried next to Don and Debbie in Beth El cemetery. A celebration of life will be held at a later date. In lieu of flowers, an act of kindness would be a beautiful tribute to Leona’s life. Take a moment to be kind to someone in need, call a friend or relative you haven’t reached out to in a while, visit a shut-in. Forgive someone. Bake someone cookies whose day could be brightened. All acts of kindness are appreciated and would carry on Leona’s legacy of love and continual kindness each and every day.

The family of Leona Ostrom created this Life Tributes page to make it easy to share your memories.

Send flowers to the Ostrom family.