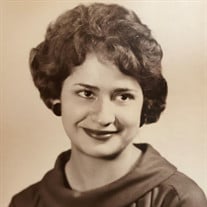 Leona Louise Cortez, 77, of Cheyenne passed away Friday, September 24, 2021 at Davis Hospice Center. She was born April 26, 1944 in Denver, Colorado, the oldest of four children to Margarito and Clorinda (Mascarenas) DeHerrera. She graduated from Rock River High School in 1962, during her high school years, she met John Cortez and they married on April 18, 1964 in Laramie. She enjoyed doing crafts, making stockings and tree skirts for members of her family as well as church bazaars. Among many of her other talents, she enjoyed cooking for her family, especially her famous lasagna recipe. After retiring as Chief Deputy Clerk from the US Bankruptcy Court in 2007, she and John enjoyed traveling the country and world, they were accompanied on many of these trips by Sylvia and Doug Jones. Among her favorites was visiting the Sistine Chapel and other religious sites in Italy. They followed the Wyoming Cowboys around the country. Leona loved and enjoyed being around children, especially her grandchildren, nieces and nephews. She would often drop everything to have the opportunity to care for them. Leona is survived by her husband, John; her sons, Paul (Dawn) and Scott of Cheyenne, Terence “Terry” (Cathy) of Bolingbrook, IL, three grandchildren, Jennifer & Tyler (Grace) Cortez & Taylor (Josh) Fearing; one great-grandchild, Arabella Cortez; and siblings, Gloria Berg & Danny (Hope) DeHererra of San Antonio & Ric DeHerrera of Cheyenne. Leona is preceded in death by her parents; brothers-in-law, Ralph Berg, Randy & Paul Cortez & Doug Jones; and sisters-in-law, Sylvia Jones, Mildred & Christie Cortez & Gogi Knowlton. A rosary will be held Friday, October 1, 6:00 pm, at Wiederspahn-Radomsky Chapel of the Chimes. A Christian Burial Mass will be held Saturday, October 2, 1:00 p.m., at Holy Trinity Catholic Church. A private burial service will be held on Monday, October 4 in Laramie, Wyoming. Condolences may be made to the family online by going to www.wrcfuneral.com. In lieu of flowers, please make donations to St. Joseph’s Food Pantry, 206 Van Lennen, Cheyenne, 82007 or Davis Hospice Center, Cheyenne.

The family of Leona L. Cortez created this Life Tributes page to make it easy to share your memories.

Send flowers to the Cortez family.