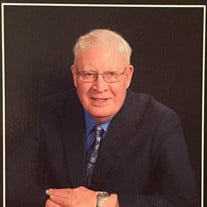 It is with heavy hearts that we announce the passing of Larry Joe Reinholtz,, 83, of Cheyenne on June 24, 2021 at Cheyenne Regional Medical Center. Larry fought a courageous battle against Lewy Body Syndrome. Larry was born on July 11, 1937 to Dema (Miller) and Floyd Reinholtz in Cripple Creek, Colorado. At age 5, his family moved to Rawlins, Wyoming. Larry attended schools in Rawlins and graduated from Rawlins High School in 1955. Larry attended and played basketball at the University of Wyoming. He returned to Rawlins where he met and married his wife of 61 years, Adelaide (Sun) Reinholtz. Larry began his career in Rawlins working for the Sinclair Refinery in 1957 before transitioning to a role at Northern Gas Company in 1966. In 1976, he was transferred to Riverton, Wyoming where he was promoted to Director with Northern Gas Company. In 1979, Larry and his family relocated to Casper, Wyoming following another promotion with Northern Gas Company as District Manager. Although Larry retired in 1998, he continued to consultant for KN Energy. Larry was active in all of his communities including: twice past president of the Rotary Club, Board Member of Carbon County Fair Board, Director on the Rawlins Chamber of Commerce Board, member of the Volunteer Fire Department, member of the Lions Club, and was a proud member of the Elks Club. He refereed many High School basketball games throughout the state of Wyoming. Larry was a joker and enjoyed talking to everyone. He valued meeting and having coffee with all of his former classmates and friends. Larry loved hunting, fishing, searching for artifacts such as arrowheads, woodworking in his custom workshop, and spending time with his grandchildren. Traveling was a favorite pastime of Larry’s. He and Adelaide took many trips together including a family trip to Ireland to watch their grandson compete in golf for Special Olympics, they went on several cruises, and traveled to the South Pacific, Panama Canal and Hawaii to name a few. In 2005, Larry and Adelaide moved to Cheyenne where Larry enjoyed following the Wyoming Cowboy athletics. He especially enjoyed attending the Wyoming Cowgirl’s basketball games. Larry is survived by his wife of 61 years, Adelaide, Daughters, Darcy Hanson (Mike) and Shelly Vivion. Grandchildren, Abby Poland (Joe), Dana Hermon (Dave), Ryan Hanson (Desiree), Robin Johnson (Levi), Aaron Vivion (Ashton). Great Grandchildren, Henry, Harvey, Avery, Corbin and Jentry and one sister, Judy Reinholtz. Larry was preceded in death by his parents. Services will be Friday, July 30, 2021, 10:00 a.m. at St. Joseph’s Catholic Church in Rawlins. Donations can be made in Larry’s name to the Lewy Body Dementia Association, 912 Killian Hill Road, SW, Lilburn, GA 30047 or any charity of your choice in his name.

It is with heavy hearts that we announce the passing of Larry Joe Reinholtz,, 83, of Cheyenne on June 24, 2021 at Cheyenne Regional Medical Center. Larry fought a courageous battle against Lewy Body Syndrome. Larry was born on July 11, 1937... View Obituary & Service Information

The family of Larry Joe Reinholtz created this Life Tributes page to make it easy to share your memories.

It is with heavy hearts that we announce the passing of Larry...

Send flowers to the Reinholtz family.