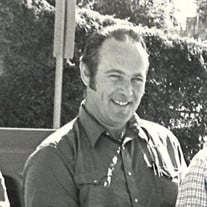 Larry T Perry, 80, of Cheyenne, WY passed away February 5, 2021 in Cheyenne. He was born February 22, 1940 in Allegheny County, PA to Tom L and Edna Lilian (O’Neil) Perry. Larry married his one true love of 59 years, Lucille (Vaillancourt) Perry in South Carolina in 1962. He was a veteran of the US Army and a licensed land surveyor. Among his many successes, Larry was instrumental in the layout and development of Brimmer Park. An artist at heart, many of his maps are prized art. Many pieces can be found prominently displayed, some of which were used during the Centennial Celebration. Larry was active in the community. He served in professional associations, worked to advance handicap access, taught at LCCC and helped build All Saints Anglican Church. Larry is survived by his wife, Lucille Perry, his son, Steven and daughter-in-law Janyce (Auker) Perry of Atlanta, GA, his sister Donna Kerns, of South Carolina, his brother Roy Perry of Virginia, two grandsons, 2 great-grandchildren, numerous nieces and nephews. He was preceded in death by his parents, his brother Harvey, his son Carter and his daughter Loretta. Viewing will be held from 9am to 5pm at Wiederspahn-Radomsky Chapel of the Chimes, Wednesday, February 10. The funeral will also be at The Chapel of the Chimes on Thursday, February 11 at 10:00 AM. Intermittent with honors at Cheyenne Memorial Gardens.

The family of Larry Thomas Perry created this Life Tributes page to make it easy to share your memories.

Send flowers to the Perry family.