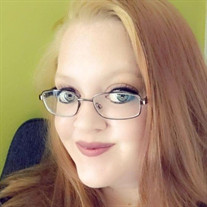 Larissa Kay Koch, 33 of Cheyenne, Wyoming, died on November 14, 2021 at Cheyenne Regional Medical Center. She was born November 13, 1988 in Cheyenne the daughter of Roger D. and Debra D. Koch. Larissa graduated from Cheyenne Central High School in 2007, continued her education by taking classes at LCCC and CSU Global. She had a variety of jobs through the years including working in retail, being a server, bartender, and bookkeeper. She enjoyed family vacations- which included trips to Hawaii and Jamacia. She loved cooking, swapping food recipes, camping, playing pool, working on vehicles, motorcycles, as well as spending time with her family and friends. She referred to lots of people she met as family members through the years-immediately including those friends as part of her “family”. She is survived by her son, Justin; mother, Debra; fiancé, Ray Clark and his children, Madesen and Zacary of Cheyenne; brothers, Kyle of Cheyenne, Mark and Nicholas of Texas, bonus parents, Tina and Jose Lara of Cheyenne, as well as many aunts, uncles, and cousins. Larissa was preceded in death by her father, Roger; maternal grandparents, Alfred and Rosemary Deans of Nebraska; paternal grandparents, Rudy and Sue Koch of Texas; and her Uncle Bill Deans of Nebraska. Larissa was registered as an organ donor with Donor Alliance. A memorial fund has been established for her son, Justin’s education. Donations may be sent to WYHY Federal Credit Union, Attn: Justin Almli, P. O. Box 20050, Cheyenne, WY 82003 A memorial service will be Monday, November 22, 2021 at 2:00 PM at Wiederspahn-Radomsky Chapel of the Chimes, 1900 East 19th Street, Cheyenne, WY 82001. The service will also be live streamed on Larissa’s obituary page on www.wrcfuneral.com. A Reception following the service will be at The Gathering Place, 1900 East 21st Street, Cheyenne, WY 82001.

The family of Larissa Kay Koch created this Life Tributes page to make it easy to share your memories.

Send flowers to the Koch family.