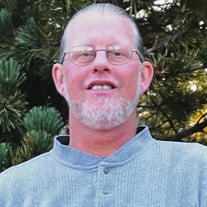 Lance Hart died May 23, 2022, in Cheyenne, Wyoming. He was born in Philip, South Dakota, May 6, 1970 to Mike and Becky (Vos) Hart. He is survived by his wife, Karen Hart; children, Hunter, Tayva, and Caden Hart; mother, Becky (Joe Dougherty) Logsdon-Dougherty; sister, Chevon Logsdon; father, Mike Hart; brothers, Jamie and Richard Hart; and mother-in-law, Pat Milam. Survivors also include Logsdon stepbrothers, Michael (Angie), Marco, and Charlie (Shelia); Dougherty stepsiblings, Dan (Amanda) and Erin (Daryn) Kramer, As well as many aunts, uncles, nieces and nephews, and cousins. Lance lived in South Dakota until his dad went into the military, which led to living in several other states and Germany. In 1982 he moved with family to Cheyenne and with the exception of four years at St. Mary of the Plains College in Dodge City, Kansas and four years teaching on the Pine Ridge Indian Reservation, he remained in Cheyenne. Lance graduated from East High School where he excelled academically, as well as athletically in soccer and football. Soccer was his number one sport. He played for Cheyenne Sting and at the college level on a partial scholarship. After his playing years were over, Lance spent his time coaching kids soccer and baseball. His kids all grew up with a ball at their feet. Family was the most important thing to Lance, friends were second. He had countless friends, many he had connected to through his job at CPS Distributors where he worked for 22 years. Several he had known for years and remained close with throughout his life, and some he had only met once. Lance was a big Dallas Cowboys and LA Dodgers fan, which meant his kids had to be too. He loved his family and never failed to tell them every chance he got; every night he would give his kids a kiss and tell them he loved them. Lance never hung up the phone without saying “I love you.” Lance was preceded in death by brothers, Darin and John Hart; grandparents, Jim and Doris Vos, Francis and Lucille Hart; step-father, Bill Logsdon; step-mother, Sharon Hart; and cousin, Chrystelle Janke. A Celebration of Life will be held on August 6, 2022. Additional details will be provided at a later time.

Lance Hart died May 23, 2022, in Cheyenne, Wyoming. He was born in Philip, South Dakota, May 6, 1970 to Mike and Becky (Vos) Hart. He is survived by his wife, Karen Hart; children, Hunter, Tayva, and Caden Hart; mother, Becky (Joe Dougherty)... View Obituary & Service Information

The family of Lance Michael Hart created this Life Tributes page to make it easy to share your memories.

Send flowers to the Hart family.