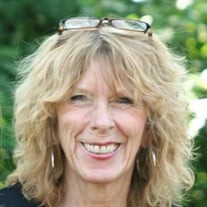 Kristen Rene (Legband) Moore passed away on January 16, 2021. Kristen was born in Scottsbluff, NE on January 9, 1948. The third of four beautiful sisters, Kristen grew up in Morrill NE and met the love of her life, Leo Moore whom she married on March 17, 1967. The foundation of their life journey together started at the JY Ranch in Jackson Hole, WY where they worked directly for the Rockefeller family over two summers during college. The experience was a source of treasured memories that still remain. They moved from their home state of NE to Cheyenne in 1977. Kristen was instrumental in assisting her husband Leo with the success of his business, Moore Insulation, for over 37 years. Kristen obtained a Degree from the Sheffield School of Interior Design in 1992. She had a passion for auctions, antiques and collectable vintage toys which adorn her home. She was very creative and took great pleasure in designing and selling her unique hand-made paper greeting cards, many of which are pinned up on bulletin boards by those who were lucky enough to receive one. She and Leo traveled to exotic beach destinations around the world over the years, in addition to boating on Lake Powell and making annual trips to their favorite spot in Ixtapa, MX. She was a lover of nature, from her appreciation of dramatic sunsets, the certainty of the moon cycles, down to the beauty of God’s smallest creatures. Kristen never met a stranger and had an appreciation for music that always made her get up and dance; the Beatles were on the top of that list. Kristen’s truest passion in life though, was her tight-knit family which included her son Jeffrey Moore and daughter Sonya (Moore) Whelan that she and Leo raised in Cheyenne. She of course loved being a very special Grandmother to her two grandchildren, Beck Moore and Finnuaa Whelan, as well as an Aunt to her many nieces and nephews. Kristen was preceded in death by her parents, John and Thiel Legband, sisters, Carolyn Groskopf, Bonnie Flock Schmer and infant broth- er John Legband. Kristen is survived by her sister Janelle (Legband) and Mark Williams, her loving husband Leo Moore, her son Jeffrey and Tina Moore, her daughter Sonya and Gerry Whelan and her two grandchildren, Beck Moore and Finnuala Whelan. In lieu of flowers, donations can be made to the ALS Organization at https://www.als.org/ donate. A Celebration of Life for Kristen will be held with family and friends at a later date in 2021.

Kristen Rene (Legband) Moore passed away on January 16, 2021. Kristen was born in Scottsbluff, NE on January 9, 1948. The third of four beautiful sisters, Kristen grew up in Morrill NE and met the love of her life, Leo Moore whom she married... View Obituary & Service Information

The family of Kristen Rene (Legband) Moore created this Life Tributes page to make it easy to share your memories.