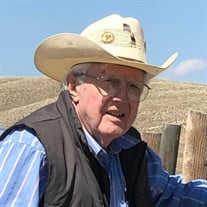 Kenneth Lee Malmborg, 92, of Cheyenne, died on January 28, 2022 in Cheyenne. He was born on November 14, 1929 in Petersburg, Nebraska, but grew up in Lusk, Wyoming. Mr. Malmborg worked for the Conoco Oil Company and worked his way up to Regional District Supervisor. He and his family moved many times though out the United States. Wyoming remained home and he was able to retire after 43 years in Cheyenne. After Retirement He purchased a section south of Cheyenne where he established K & K Livestock in 1989. Where he enjoyed many years of raising cattle, horses, fixing fence, and other ranch projects. He was a longtime faithful member of North Christian Church for many years. He served as their treasurer for several of those years. He also, oversaw and worked directly with the general contractor to build their new church building which was completed in 1997. He is survived by his wife, Norma Malmborg; son, Kent Malmborg (Carolyn), daughter, Kari Mulinix (Rob), son, Kody Malmborg (Misty), John Langley (Sherena), Jeneane Buresh (Dave), Jan Loftin (Tom); two sisters, Shirley Wasson and Evelyn Merrill (Ken); 19 grandchildren; and several great grandchildren. Mr. Malmborg was preceded in death by his mother, Hattie (Leona) Baughn; stepfather, Ray Baughn, father, Gus Malmborg, 1st wife, Paula Malmborg, daughter, Debbie Malmborg; and his sister, Marian Frodine. Love is a gift. He was a gift to all who knew him and especially his family. Services will be Monday, February 7th at 11:00 a.m., at the North Christian Church. Burial will be Tuesday, February 8th in the Lusk Cemetery, with a graveside service at 11:00 a.m. In Lieu of flowers donations can be made to North Christian Church or a charity of your choice.

Kenneth Lee Malmborg, 92, of Cheyenne, died on January 28, 2022 in Cheyenne. He was born on November 14, 1929 in Petersburg, Nebraska, but grew up in Lusk, Wyoming. Mr. Malmborg worked for the Conoco Oil Company and worked his way up to Regional... View Obituary & Service Information

The family of Kenneth Lee Malmborg created this Life Tributes page to make it easy to share your memories.

Send flowers to the Malmborg family.