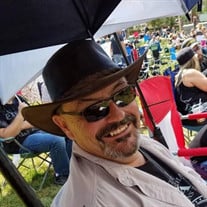 Kenneth Wayne Halley, 59, of Cheyenne, Wyoming, passed from his life to his eternal home with Jesus on April 1, 2021. Kenny, as he is affectionately known to his family is survived by his wife Ellen Joyce Halley, his two daughters Abigail Joyce Halley and Tracy Lynn Halley, his son Andrew Wayne Halley, two sisters Christine (Larry) Hollomon and Janice Reavis, brothers Ed (Debbie) Halley and Bill (Brenda) Halley, Jr, Chuck (Theresa) Wood, and two grandchildren Kaila and James. He was so loved by his nieces and nephews. He is predeceased by his father William C. Halley, his mother Mildred Ann Wood, stepmother Gladys Halley and stepfather Charles Wood, nephew Derek Halley, and his brother-in-law, Jack Reavis. Kenny loved life. The love he had for his children and family was known by all who knew him because he never stopped sharing those thoughts with everyone he knew. He loved his music, and he loved his country! Louisiana, “vintage Louisiana” as he would say, where he was raised a good part of his life, was where he called “home”. His fun-loving ways, his laugh, his giving heart, will be deeply missed. He is with the lord now. Oh, happy day when we meet again! The family will gather for two memorial services. The first service will be at Wiederspahn-Radomsky Chapel of the Chimes in Cheyenne, WY on May 1st at 2:00pm. The second service will be held at a later date (to be decided) in Arnett, OK at the gravesite of Kenny’s mother, Ann Wood, in the Debolt Cemetery, where he will have his final resting place with her. In lieu of flowers, a gofundme fundraiser has been set up by his daughter, Abby Halley, on Facebook. Memorial gifts are preferred and will be used by the family to honor his life and memory.

Kenneth Wayne Halley, 59, of Cheyenne, Wyoming, passed from his life to his eternal home with Jesus on April 1, 2021. Kenny, as he is affectionately known to his family is survived by his wife Ellen Joyce Halley, his two daughters Abigail Joyce... View Obituary & Service Information

The family of Kenneth Wayne Halley created this Life Tributes page to make it easy to share your memories.

Kenneth Wayne Halley, 59, of Cheyenne, Wyoming, passed from his...

Send flowers to the Halley family.