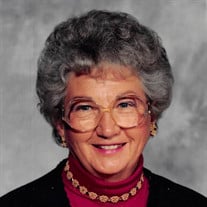 Kathryan Marlene Toulouse died in her home in Cheyenne on Tuesday, January 12. She was born in Rawlins, WY on February 6, 1933, to Marvin Taylor and Emily Gersic. After her parents divorced when Marlene was a young child, her mother moved herself and Marlene to Casper, and remarried. Always a hard-worker, Marlene kept up three jobs as a teenager and cared for her younger siblings until she graduated from Natrona County High School in 1951. Having earned scholarships and while working each summer at the Flagg Ranch near Yellowstone, she attended Casper Junior College, graduating with honors in 1954. She then attended the newly-formed nursing program at the University of Wyoming, graduated in 1955 as an RN, and moved to Sheridan to start her career at the VA Hospital there. Marlene married Robert Toulouse, a photographer, in 1956, and over the next few years they began raising their three children, while enjoying boating and camping; activities which became life-long pleasures. In 1965 the family moved to Cheyenne, and Marlene progressed in her career, first briefly at DePaul, and then at the Cheyenne VA Hospital, where she worked full-time until her retirement in 1995. Over the years, Marlene joined Eastern Star Harmony Chapter #53, actively participated in Daughters of the Nile Temple 73, and she and Robert were tireless members of the Cheyenne Shrine Club. An avid baseball fan since her youth, Marlene was especially devoted to her favorites, the Cincinnati Reds, until the Rockies arrived, and from then on she passionately supported the Denver team, still traveling to Scottsdale for spring training games as recently as a couple years ago. Her other great joys were fishing, quilting, and playing slot machines. Always an efficient multitasker, she could be found piecing a quilt top while trolling for lake trout, or watching a game from her seat in the casino. But most of all, Marlene spent her entire life caring for others. She was a devoted mother and wife, a wonderful friend, and an excellent nurse. Despite her impoverished childhood, she always expected one should be grateful for whatever one has, generous with one’s time and abilities, and compassionate toward those who certainly suffer more than oneself. She completely lacked self-pity, detested dishonesty, and worked hard every day to make her house a home, her friends happy, and her patients well. Her steady strength, quiet competence, and practical optimism will be sorely missed. Forever a Wyoming gal, she loved the outdoors and deeply appreciated the beauty and marvel of the world. Marlene is survived by her daughter Anne, who lives in Cheyenne, her son Brian, who lives in Torrington, her son Alan, who lives in Denver, and her brother, Robert, who lives in Casper. She requested she be cremated and that there be no memorial service for her. However, the family may later host a remembrance get-together for her and Robert, and that will be announced. The family asks that any donations please be made to Shriners Hospitals for Children.

Kathryan Marlene Toulouse died in her home in Cheyenne on Tuesday, January 12. She was born in Rawlins, WY on February 6, 1933, to Marvin Taylor and Emily Gersic. After her parents divorced when Marlene was a young child, her mother moved herself... View Obituary & Service Information

The family of Kathryan Marlene Toulouse created this Life Tributes page to make it easy to share your memories.

Kathryan Marlene Toulouse died in her home in Cheyenne on Tuesday,...

Send flowers to the Toulouse family.