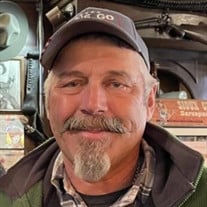 Joseph Earl Sharp died April 9, 2022, in a motorcycle accident in Cheyenne, WY. He was born on May 14, 1965, in Ord, NE to James and Karen (Scott) Sharp. Joe graduated from Mullen High School in 1983 and worked various ranching jobs before enlisting in the Air Force in 1986 where he was stationed at Woodbridge AFB in England. He married his wife, Terri Andersen on October 22, 1988, in Mullen, NE where they proceeded to their first duty station in Anchorage, AK. Their two oldest children were born at Elmendorf AFB, Jeffry, and Shelbi. After a brief stint in Riverside, CA, Joe transferred to the Air National Guard and the family moved to Casper, WY where their youngest son Jacob was born. Joe worked for Lincare for many years before taking a full-time position as a Fuels Specialist in the Air Guard. Upon all the kids graduating, Joe and Terri settled in Cheyenne, WY where Joe became a Crew Chief for C-130s until his retirement in 2014 after 28 years of service. He then worked for Kaiser Frontier before obtaining his CDL in 2016 where he continued to drive truck for Werner Trucking then B Squared Farming and Trucking of Gering, NE. He was currently employed at Rolfson Oil company and establishing his own trucking company, Reverse K Bar One Trucking. Joe was preceded in death by his father, Jim Sharp and grandparents, Jim and Marguerite Scott and CB and Helen Sharp; uncles, Butch and Bill Sharp; aunt, Janice; and uncle, Arden Davis. Joe is survived by his wife, Terri; children, Jeffry and wife Heather, Shelbi Leibee and husband Chris, and Jacob and partner Rhonda Berg; mother, Karen Sharp; sister, Kelly Jacobsen and husband Chris of Broken Bow; sisters, Tiffany Johnson of Alliance and Teresa Donohoe and husband John of North Platte; his in-laws Judy (Andersen) Garcia and husband Carlos of Evans, CO, and Kevin and Kim Andersen of Eaton, CO; along with numerous aunts, uncles, cousins, nieces and nephews. A celebration of life will be Saturday, May 14, 2022, from 2 to 4pm at the Auditorium in Seneca, NE, on his 57th birthday. Burial to follow at the Seneca Cemetery. A local celebration in Cheyenne will be held on May 7, 2022, at 3pm at the Little Bear Inn.

Joseph Earl Sharp died April 9, 2022, in a motorcycle accident in Cheyenne, WY. He was born on May 14, 1965, in Ord, NE to James and Karen (Scott) Sharp. Joe graduated from Mullen High School in 1983 and worked various ranching jobs before... View Obituary & Service Information

The family of Joseph Earl Sharp created this Life Tributes page to make it easy to share your memories.

Send flowers to the Sharp family.