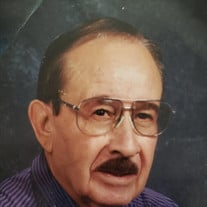 Joseph Edward "Ed" Garcia, 88, of Cheyenne, WY, was called to his heavenly home on February 7, 2021. He was born October 29, 1932 in Wagon Mound, NM. Edward was preceded in death by his son Robert L. "Bobby" Garcia, who passed from Leukemia January 7, 2021; his parents Juan and Fidelia Garcia; his siblings Viola Solano, Lucille Gomez, Charlie Garcia, Frank Garcia, Monie Roybal, and Tony Garcia. He is survived by his siblings Irene Vasquez, Theresa Garcia, Henrietta Attencio, Stella Martinez, and Andy Garcia; his children Eddie, Steve, Anna Maria, and Jeff Garcia, Monica Rhoades, and their mother Dolores Garcia (Ramirez); 14 grandchildren, 15 great grandchildren; and numerous relatives. Ed was an Air Force Veteran and also retired with 34 years of Civil Service as a Cook/Base Supply Tech. at F.E. Warren Air Force Base in Cheyenne, WY. Raised in Wagon Mound, NM, his large immediate family and relatives were close knit and cared for one another in so many ways. He worked in the fields with family members while attending school. Being raised speaking the Spanish language, his family gracefully learned English as well. Edward's family moved north to Colorado and he met Dolores Ramirez in 1950 while working in the fields with their families. They dated and were married on January 12, 1952 at Holy Family Catholic Church in Ft. Collins, CO. Edward joined the service in 1952 and was stationed in England, and Harlingen, TX. Edward and Dolores had their first child, Edward Paul, on January 2. 1953 and had 5 more children as their beautiful family grew over the years. After his service with the Air Force, he was offered a Civil Service job at F.E. Warren Air Force Base. He was a great provider and worked additional part time jobs when needed. Ed was steadfast and a wonderful family man who supported his children and grandchildren in many of their sports, activities and personal endeavors. He played basketball often with his family on the basketball court he constructed in the back yard. He was active in sports over the years, enjoyed spectator sports and was a Denver Broncos fan. Edward sang in St. Joseph's Catholic Church choir and participated in the prayer group with Dolores. They both taught youth catechism classes as well. Edward and Dolores enjoyed cooking together, watching movies, dancing, hosting gatherings in their home, listening to mariachi music and other genres, picnics in the park with family and relatives, family reunions, home projects, horseback riding, mini trips with family, raising children together and so much more. Ed later attended Good Shepherd Church and Cheyenne Hills Church where he continued to volunteer in various capacities. He loved worshiping with his voice and tambourine. Edward enjoyed the outdoors, camping, fishing, and taking his family on mini outings and vacations in their family trailer. He cooked for numerous funerals, weddings and special events. He provided volunteer services for Meals on Wheels, food pantries, farmer's markets, church and community events. Ed enjoyed visiting Nursing Homes and senior facilities, as well as helping youth through the CASA Program and Foster Grandparent Program with Laramie Co. School District #1. Ed was a "handy man" and completed many projects for his family and others. He would attest that his family, extended family, in-laws and numerous friends have blessed his life tremendously. Family gatherings brought him so much Joy. Edward's faith in Jesus Christ, even when his body was weak and in pain, inspired many. Because of his immense love and gift for service, he has blessed numerous lives and is deeply loved. He was considered a "holy man" by his children who have expressed great appreciation and love for him. Ed will be deeply missed, yet we know he is whole again and shining bright in his heavenly home. Thank you Edward (Dad) for making our world a better place. Your love reigns forever in our hearts and memories bring us warmth, happiness and consolation. Memorial services will be Saturday, February 20th, 2:00 p.m., at Calvary Chapel, 9309 Ridge Road. Military honors will follow.

Joseph Edward "Ed" Garcia, 88, of Cheyenne, WY, was called to his heavenly home on February 7, 2021. He was born October 29, 1932 in Wagon Mound, NM. Edward was preceded in death by his son Robert L. "Bobby" Garcia, who passed from Leukemia... View Obituary & Service Information

The family of Joseph Edward "Ed" Garcia created this Life Tributes page to make it easy to share your memories.

Send flowers to the Garcia family.