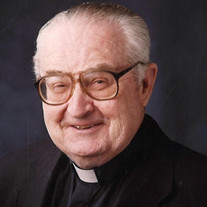 Father Joseph Fraher, 94, completed his pilgrimage here on earth Wednesday, July 8th, 2020. He passed away peacefully in his sleep under the loving care of the nurses and staff of the Davis Hospice Center in Cheyenne. He was born on Dec. 02, 1925 in Denver, CO., but moved to Rawlins, WY when he was still a toddler. He attended school in Rawlins, however at a young age he felt a call to the vocation of the Catholic priesthood, and while still in high school enrolled in a pre-seminary program and then St. Thomas Seminary in Denver. He was ordained a Catholic priest on June 3, 1950 at St. Joseph’s in Rawlins, WY. He served many parishes around the Diocese of Cheyenne in his 70 years of priesthood. More than anything, he loved to call people to gather with him around the table. Of the most importance was the table of the Lord, in the celebration of the Most Holy Eucharist, second the dining room table of so many parishioners, friends and family, and last around a poker table, where few could match his skill and ability. He and his trademark stained yellow sweater traveled anywhere his car would take him, from Mexico to Canada, New York to California. His favorite place he visited was the campus of Notre Dame, and he regrets not going to Rome, even if he had to fly. There was not a major professional sporting event he didn’t somehow get a ticket to go see, including a ticket to the Masters. He was a strong advocate for the laity and for them to love and be involved in the Church through CYO, CCW, Newman Club, and the Knights of Columbus. He did not have a favorite parish, he loved them all and the parishioners of them all equally. Know matter where he served, everyone knew if the Bronco’s had an early, televised game, it would be a short homily. Of course they also knew of his equal dedication to the Wyoming Cowboys and Notre Dame. Survivors include one brother, Mike Fraher of Seattle, WA, several nieces and nephews, and grandnieces and nephews who love him greatly. He was proceed in death by his parents, Mary and Joseph Fraher, brother John Fraher and wife Geraldine, sister Eileen Krause and husband Bernie, sister-n-law Mary Fraher, nephews Terry Fraher and Richard Fraher and niece Terri Larsen. Vigil for the deceased will take place on Tuesday, July 14th, 2020 at 7:00pm at the Cathedral of St. Mary’s in Cheyenne, WY. A Funeral Liturgy will be celebrated on Wednesday, July 15th at 11:00am at St. Josephs in Rawlins, WY with The Most Reverend Steven Biegler as celebrant. Internment will be held at the Rawlins Cemetery. Masks will be required. To ease the hearts of many friends and family who are unable to gather to celebrate his life at this time, a Mass and celebration of his life will be held in Laramie when it is safe to do so. Expressions of sympathy in his name may be made to: The Cowboy Joe Club, Laramie or Davis Hospice Center, Cheyenne. Funeral arrangements are under the direction of Wiederspahn-Radomsky Chapel, Cheyenne.

Father Joseph Fraher, 94, completed his pilgrimage here on earth Wednesday, July 8th, 2020. He passed away peacefully in his sleep under the loving care of the nurses and staff of the Davis Hospice Center in Cheyenne. He was born on Dec. 02,... View Obituary & Service Information

The family of Joseph Patrick Fraher created this Life Tributes page to make it easy to share your memories.

Send flowers to the Fraher family.