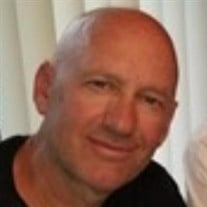 Long time Laramigo and Wyoming native Joseph Michael Bundy died January 13th, 2021. Joe was born August 13, 1962 in Cheyenne, Wyoming to Betty Jean and Jim Bundy. Early on Joe learned great kindness from Betty Jean and a terrific work ethic from Jim as he worked summers building with his dad and brothers. Joe lived his life with wonder, humor, compassion, and without fear of denying his unique personality. During Homecoming Week at Central High they had a Joe Bundy Day to celebrate his individual style. At twenty years old he traveled by bus to see New Years Eve in Time Square, saw it and came right back to Wyoming. Joe was an adventurer and world traveler. He traveled extensively in Asia, including a bike trip from Tibet to Nepal, teaching English in Taiwan for six months, and studying yoga in India most recently. He received a bachelor’s degree in Sociology. He later returned to school to follow in his father’s footsteps and become a teacher. He taught at Linford Elementary School for 28 years guiding and caring for a generation of Lions with humor, caring, and high expectations. Joe had an insatiable curiosity and lust for life. Running was a constant companion from a young age where he was successful in AAU and high school cross country. Later in life he ran several marathons and 50k trail races. He studied yoga, earning a 500-hour teaching certificate, and Buddhism, which led him to meeting people across the country with like spirits. He was in the Ad-Liberation Front improve comedy group, and will be remembered for his puns, wit and abstract humor for years to come. He was a man of words beyond humor, being an avid reader, journal and Haiku writer, even having two articles published in Elephant Magazine. He was a fashion maven, known for his style with a particular love of sunglasses, Patagonia, and running shoes, of which he was a historian of Nike. He was also a cat lover, skilled Frisbee golfer, late night skateboarder, ping pong wizard, and groovy dancer. Joe was proceeded in death by his Father James Alan Bundy. He’s survived by his Mother Betty Jean Bundy, Brothers Ed Bundy, John Bundy (Stacy) and his sister Laura Beaver (Darryl) as well as several nieces and nephews, and his cat, Budapest. Joe was beloved by his family and friends and he will be terribly missed. The Bundy Family has a Memorial Park Bench at Holiday Park in Cheyenne. It is a very nice place to sit, look at the lake and reflect upon on our loved ones, they want all of Joe's friends to know that it is there for anyone to enjoy. A celebration of his life will be held this summer. Donate to a charity of your choice in Joe’s memory, as he never said no when anyone asked him for a donation or for help.

The family of Joseph Michael Bundy created this Life Tributes page to make it easy to share your memories.

Send flowers to the Bundy family.