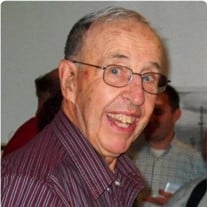 John T. Roberts III 1927 – 2022 John Thomas Roberts III, 94, passed away on March 30, 2022 in Cheyenne. Born in Englewood, Colorado to John Thomas and Mary Morse Roberts, John’s early years were spent in the Denver area. After school, John joined the US Navy serving just as WWII ended and then attended radio school in New York City. After a few years he returned to Colorado and met and married Lois Maree Ross and the couple enjoyed 68 years of marriage. In the early 1950s, John and Lois moved to Wyoming. They initially lived in Casper, but shortly after moved to Cheyenne where they would settle and raise their 4 children. John worked for the Wyoming highway department for several years and in 1957 John opened Wycomco, an electronics company that began maintaining 2-way radios locally and continued to bring communications equipment and capabilities to rural communities across Wyoming for nearly 50 years. In the early 1960s, John built a tower on the top of Laramie Peak, 5 miles from the nearest vehicle access point, and provided radio access to the communities in central Wyoming. As the communications industry evolved, John opened another business – Page One of Wyoming – which was one of the first paging companies in Wyoming. As paging was making its way across the U.S., John focused on providing these same services to rural communities and hospitals in Wyoming while the larger companies focused elsewhere. John continued to maintain and manage towers across the state until he retired in 2012. John had a zest for life and adventure. He was always on the go and always had a new project in the works. He knew every road and town across Wyoming and brought family members along with him whenever he could. Trips up Laramie Peak whether on motorcycle, snowmobile, hiking, or flying were a regular occurrence. John was preceded in death by his wife, Lois; his parents; and his sisters Dorothy Mizer, Elinor Winchester, Ray Stevenson and Esther Sears. John is survived by his sister, Ruth Zegler of Oklahoma City; 4 children: Cindy (Carl) Joerschke of Greeley, CO; Joyce (David) Morris of Jonesville, LA; Linda (Larry) Swing of Cheyenne; and Dale (Kristin) Roberts of Cheyenne. He is also survived by his grandchildren; Bryan (Nichole) Woodcock, James (Celly) Morris, Lisa Woodcock, Anna Roberts, Abigail (Wes) Lockard, Scott (Shannon) Woodcock, Breayna (Mike) Whisenhunt, Andrew (Rachel) Woodcock, and Ashley (Matt) Joy. He is also survived by 15 great-grandchildren. Services will be held at Weiderspahn Radomsky in Cheyenne at 10 AM Monday April 4th

The family of John Thomas Roberts III created this Life Tributes page to make it easy to share your memories.

Send flowers to the Roberts family.