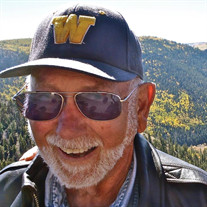 John David Pippinger, three days shy of his 81st birthday, died peacefully on February 19, 2021 in Cheyenne, WY of complications from Parkinson’s Disease. His wife, Lynn Boak and his daughter were by his side. Born in the family home in Sanborn, IA and raised in Miami, FL, John was an avid athlete, excelling in particular in football. He met his first wife, Diane in Miami and soon moved to Detroit, MI where he started a long, successful career with the Internal Revenue Service. After the birth of their only child, Kimberly, he was transferred to Twin Falls, ID, and in 1976 to Cheyenne, WY which became his permanent home and where he would meet his second wife, Lynn. John always dreamed of moving West and becoming a cowboy. Alongside Lynn, his dream was realized as they worked together to create an Alpaca business on their small ranch north of town. John was an ardent hunter and outdoorsman and an excellent marksman. He loved to see the country, whether by horse or by Harley and was a devoted husband and father whose absence will be felt by his family, many friends and his critters. John was preceded in death by his parents, Rex and Jeanette (née Kroese) Pippinger, his sister Rexine Rice (Ethridge, TN) and his first wife, Diane (née Kowalski) Pippinger. He is survived by his wife Lynn Boak, daughter Kim Pippinger (Taos, NM), sister Barbara Pippinger (Hollywood, FL) and many cousins, nieces and nephews. A celebration of life will be held at a later date, TBA.

John David Pippinger, three days shy of his 81st birthday, died peacefully on February 19, 2021 in Cheyenne, WY of complications from Parkinson&#8217;s Disease. His wife, Lynn Boak and his daughter were by his side. Born in the family home... View Obituary & Service Information

The family of John Pippinger created this Life Tributes page to make it easy to share your memories.

Send flowers to the Pippinger family.