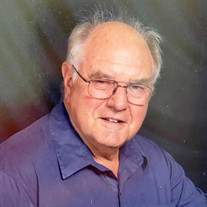 John Keith Marquardt, age 87, passed away on November 26, 2021 at his home in Pine Bluffs, Wyoming. John was born in Scribner, Nebraska to John W Marquardt and Meta (Sievers) Marquardt, where his family operated a dairy. When John was a young man his family moved to Pine Bluffs, Wyoming, where John attended Pine Bluffs High School, graduating in 1950. He married Roberta Johnson in 1953. Together they had 4 children. After serving in Germany in the United States Army, he began farming and ranching in the Pine Bluffs area. Eventually, with a lot of hard work and foresight, this operation would become Marquardt Farms. John was involved in several other business enterprises, including Pinesair and Pinesair Reload. John was very involved in his community. He served as mayor of Pine Bluffs for 8 years, and was also on the town council. He also was a member of the JCs, served on the boards of Tri-State Coop, Coop Grocery store in Pine Bluffs, Pine Bluffs Senior Center, Cheyenne -Laramie County Joint Powers Board, and Nebraska District 23 School Board. He was a member of the Pine Bluffs Trail Days committee. John was a member of the Pine Bluffs United Methodist Church where he served on the board and was advisor to MYF. He enjoyed participating in the Trail Days Melodrama; where he was a memorable MC and performed some hilarious olio acts. John was an aviator and loved flying, accumulating 11,556 hours of flight time! He was a flight instructor and taught over 100 students the joy of flying. He owned and was the pilot for Pinesair; a charter flight and instructor service. He was the Manager of the Pine Bluffs Airport and was a member of the Civil Air Patrol. John was a caring and loving family man, who left a legacy of positive thinking and a can-do attitude. . He was preceded in death by his wife, Roberta Marquardt; parents, John and Meta Marquardt; sisters, Dolores Wimmer and Marjorie Moore. Survivors include; sister, Marion Nelson, Murrieta, California; children, Cheryl (Ron) Leef, Weston, CO, Karen (Layne) Wilhelm, Fallon, NV, Greg (Joleen)Marquardt, Pine Bluffs, Kevin (Kim) Marquardt, Cheyenne, Wyoming; grandchildren, Cody Leef, Leslie Leef, Michael (Nikki ) Wilhelm, Russell (Britnee) Wilhelm, James (Stacey) Marquardt, Jessica (Clint) Fornstrom, Jordan (Sarah) Marquardt, Kenzie (Travis) Meredith, Courtney Budnick, Cassie ( Tyler) Williams, and numerous great grand children. A Celebration of Life will take place December 11 at the United Methodist Church in Pine Bluffs, Wyoming at 1:00 in the afternoon. In lieu of flowers, donations to the Pine Bluffs Senior Center would be greatly appreciated.

John Keith Marquardt, age 87, passed away on November 26, 2021 at his home in Pine Bluffs, Wyoming. John was born in Scribner, Nebraska to John W Marquardt and Meta (Sievers) Marquardt, where his family operated a dairy. When John was a young... View Obituary & Service Information

The family of John K Marquardt created this Life Tributes page to make it easy to share your memories.

Send flowers to the Marquardt family.