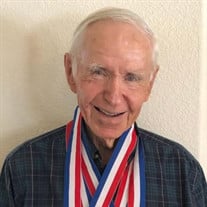 Joe Lynden Chasteen of Cheyenne passed away, peacefully, on August 17. He was born June 8, 1925 to Edna and Melvin Chasteen in Uva Wyoming. He was reared primarily in Chugwater, graduated from high school and served in the Army Air Corps during World War II. Following his discharge, he attended Chadron State College where he played football, basketball and graduated with a degree in education. He maintained lifelong friendships with teammates through the purple passion reunions. Joe’s teaching career spanned 13 years, during which he taught English and coached in Manville, Torrington and Laramie during the Deti era, while also earning his Master’s Degree from the University of Wyoming. He was a beloved teacher and enjoyed sharing memories with former students and athletes. He was a great speaker and had a gift for remembering stats and details of former games, which made him a frequent master of ceremonies at high school reunions. Joe served on both the Albany County and state school board over a span of 20 years. Serving as president, during the years his daughters graduated, gave him the privilege of handing them their high school diplomas. In the 1960’s, he opened an insurance agency in Laramie and continued for 40 years. He had the gift of gab and was very personable, which made him a great salesman. He became a certified life underwriter and won many sales awards from his company, which included a trip to the World’s Fair in New York City for his family in 1964. In the 1970’s, he was elected to two terms in the state Legislature. He loved a hearty political debate, leaned towards the right but was always willing to listen and negotiate for the good of Wyomingites. Partially retired, he accepted a position as an agriculture enumerator for the State, collecting ag and crop data for southeast Wyoming. He was twice nominated for National Enumerator of the Year, winning the prestigious award at the age of 81. He received the award in Washington, D.C. Incredibly, he continued this work and reluctantly retired at age 94. During his full and interesting life, he found great joy in keeping up with all that was going on in the lives of his children, grandchildren and great grandchildren, right to the end. Joe loved sports and was a devoted Wyoming Cowboy fan. He cheered enthusiastically for the Denver Broncos and his alma mater, Chadron State. He enjoyed bird hunting and fishing. He participated in the senior Olympics into his 90’s, bowling and golfing. While in Chadron, he met and married Lorena Jean Thomas. They had three daughters, Jody (Harry) Love of Loveland, CO, Jacquie (Sam) Whitney of Wheatland, WY, and Jana (Oscar) Erickson of Rock Springs, WY. They later divorced. On New Year’s Eve in 1980, he met Virginia Phillippi, and they enjoyed 41 years together. They shared a love for each other, pets, garage sales, dancing and bowling. This brought him bonus children, Ginger (Jim) Hatten and Jeff Phillippi. In addition to his daughters, Joe is survived by Virginia Phillippi, three grandsons; Matt (Shaunte) Hallsted, Tom (Kristin) and Brian (Maya) Erickson and eight great grandchildren. He was preceded in death by his parents, siblings, grandson Todd Hallsted, son-in-law, Oscar Erickson, and John Phillippi. A memorial service will be conducted by Rodger McDaniel at Highlands United Presbyterian Church on August 27, 2021, at 10 am. Refreshments to follow. Masks appreciated. In lieu of flowers, memorial donations may be made to: Cheyenne Animal Shelter 800 Southwest Drive 82007 Meals on Wheels of Cheyenne 2015 South Greeley Highway 82007

Joe Lynden Chasteen of Cheyenne passed away, peacefully, on August 17. He was born June 8, 1925 to Edna and Melvin Chasteen in Uva Wyoming. He was reared primarily in Chugwater, graduated from high school and served in the Army Air Corps during... View Obituary & Service Information

The family of Joe Chasteen created this Life Tributes page to make it easy to share your memories.

Joe Lynden Chasteen of Cheyenne passed away, peacefully, on August...

Send flowers to the Chasteen family.