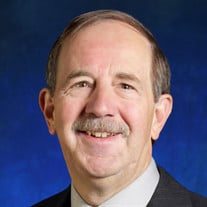 Jerome (Jerry) William Krois was born August 3, 1948 to Alphonse W. and Alma J. (Forster) Krois in New Ulm, Minnesota. He passed away on September 6, 2020 at Davis Hospice Center in Cheyenne, Wyoming from metastatic pancreatic cancer. The Krois family of 3 children moved to Denver Colorado when Jerry was 8 years old. He attended Catholic schools through his graduation from Regis University Denver in 1970 with a BA degree. He met his wife, Nancy Meeker, when they were attending colleges in Denver and they were married in August of 1971. They settled in Cheyenne in early 1974 following Nancy's graduate school in Eugene, Oregon. Jerry completed his Master's in Library Science from Denver University in 1979. Libraries have been a large part of Jerry's work life starting at the Denver Public Library system, Rangely College library (Colorado), Laramie County Public Library, and the Wyoming State Library (1978 - 2009) where he served as Deputy State Librarian for 23 years. Early in his career at the Wyoming State Library he was the manager of the original version of the WYLD network (bar codes on books). He later managed federal sub-grants and statewide library projects and provided continuing education and consulting support for Wyoming's county library boards, foundations and directors. Over his career he has also conducted workshops in Colorado, South Dakota and Arizona. He enjoyed working with the county libraries and networking with other states. After retiring from the state library in 2009 he immediately became the director of the Eaton, Colorado Public Library preparing for and completing the construction of a major addition to the 1911 building. He thoroughly enjoyed his tenure at the Eaton Public Library and with networking with the Eaton community and surrounding libraries. He served in the Chamber of Commerce in Eaton and volunteered in the Eaton school Junior Achievement Program. He retired from Eaton in 2015 with the addition completed and great staff and Board members to carry on. Jerry served in various positions with the American Library Association, the Wyoming Association of Libraries, and the Wyoming Community Foundation. He served on the Board of Directors for Meridian Trust Federal Credit Union for ten years and on the supervisory committee prior to that. When his son, Andrew, was young he was active in Boy Scouts as a leader and support parent and coached soccer. In retirement Jerry enjoyed volunteer work through the Frontier Lions Club, Wyoming State Museum, and United Way of Laramie County. He enjoyed his volunteer work with VITA and the AARP tax preparation programs and volunteers. His hobbies included collecting coins, travel patches and pins and photographing sights on many road trips and ocean and river cruises. He especially enjoyed the Rocky Mountains, Hawaii, Alaska and beaches. Jerry was preceded in death by an older sister, Judith Krois Flock, both parents and all his aunts and uncles. Jerry is survived by his wife, Nancy (Meeker), of Cheyenne and son, Andrew (Mitzi) and granddaughter, Mia, of Essex Junction, Vermont. He is also survived by a younger brother, Paul (Susan), of Aurora, Colorado and nephew, David (Shannon) Flock and family (Nolan and Maggie) of Peoria, Arizona. Due to COVID 19 no funeral services will be held but local Catholic Masses will include him in the memorials. Donation may be made in his memory to the Frontier Lions Club or the United Way of Laramie County. The family thanks the wonderful staff at the Davis Hospice Center who cared for him the last 2 months of his life. The family also thanks his friends and everyone who made Jerry's life brighter throughout his 46 years in Wyoming and in Eaton, Colorado.

The family of Jerome "Jerry" W. Krois created this Life Tributes page to make it easy to share your memories.

Send flowers to the Krois family.