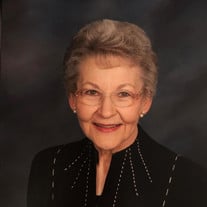 Jean Irene Dove, 91, of Cheyenne died Saturday October 10, 2020. She is survived by one sister Dorothy Miller of Imperial Nebraska, her children Jeffrey Dove of Greeley, CO and Carla Wilson of Broomfield, CO. 5 grandchildren, Courtney Longley of Austin, TX, and William Wilson, Grace Wilson, Sean Wilson and Henry Wilson all of Broomfield, CO, along with her great grandson Ayden Longley of Austin, TX. She was preceded in death by her parents Henry and Anna (Meier) Vogel, 7 brothers, Carl Vogel, Emil Vogel, Ruben Vogel, Jake Vogel, Connie Vogel, Eddie Vogel and Henry Vogel and 4 sisters Marie Vogel, Emma Hay, Lydia Walker and Ruth Ann Richart. Jean was born and raised in Longmont, Colorado and graduated from Longmont High school in 1946 with honors. After high school she worked at F. W. Woolworth where she met her husband of 54 years, Carlton M. (Buzz) Dove. After their marriage Carl's job took them to Englewood, CO, Provo, UT then Ogden UT where Jean worked at J. C. Penney. They were later transferred to Salt Lake City, UT, Longmont, CO then Laramie, WY. While Carl worked for Mountain Bell for 38 years Jean, while in Laramie worked at Blue Cross Blue Shield in the IBM department at the University of Wyoming. Later in Cheyenne she worked at the Wyoming highway department. In 1959 they adopted their son Jeffrey Dove. In 1961 Carl was transferred to Riverton, WY and Jean became a stay at home mom. While in Riverton they joined the United Methodist Church where Jean joined the United Methodist Woman's organization and was a member of the church choir. August 25, 1963 Jean and Carl adopted their daughter Carla Jean Dove. Later Carl's job would take then to Cheyenne, WY where they made their home. In 1969 Jean was initiated into the P.E.O. sisterhood, Chapter S and served many different positions including a three-year term as President. As a member of the United Methodist Women she served in every position along with teaching bible study classes. She sang for 35 years in the church choir including several solos. After their children were in Junior High school Jean took a job at Imperial Homes, but shortly after that she applied and was hired by KFBC radio to have her own talk show "Prime Time with Jean" where she interviewed well know residence of Cheyenne and the state of Wyoming along with discussing social concerns and the education system. Jean continued to do this for almost 13 years. At the church level she served on almost every committee and was chairman of the board of trustees and lay leader. She went on to serve the Rocky Mountain conference level, both with United Methodist Women and as a church officer, along with occasionally conducting the sermons for the church. She was also instrumental as chairman of the Organ committee at the church. She traveled extensively with these organizations taking her to Oregon, Washington, Arizona, Ohio and California. She was also on the committee council of aging. She served 3 years on the board of the Rocky Mountain Regional Mission School and became Dean of that school. In 1990 Jean, her daughter Carla and granddaughter Courtney traveled with a mission group to St. Petersburg, Russia and Moscow. They worked at the number 33 orphanage in St. Petersburg rebuilding the orphanage. Jean also traveled with the church to Jerusalem. Her husband Carl passed away December 2, 2002. Jean continued to be active in United Methodist Women and P.E.O., along with all her volunteer work for the church. Jean was an accomplished seamstress, making costumes for the Cheyenne Little Theatre and other organization. She was also an amazing cook, upholstered furniture was an artist and a leader in all things. Donations may be made to Meals on Wheels. A memorial service will be held on Monday, June 28, 2021 at 11:00 am at First United Methodist Church. In light of the current pandemic, please feel free to wear a mask if you desire.

The family of Jean Irene Dove created this Life Tributes page to make it easy to share your memories.

Send flowers to the Dove family.