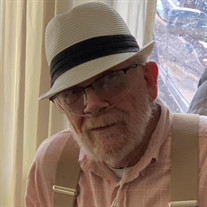 On December 27, 1941, James Sutton Aldrich Sr. was born to Anna Watkins in San Francisco, California. He was adopted at birth by Arnold Frederick Sutton Aldrich and Caroline Bernice Moss. He died March 28, 2022 at Davis Hospice Center in Cheyenne, Wyoming, with family and close friends nearby. He grew up in Fresno, California, with his also-adopted sister, Pamela Orta. He spent lots of time with his cousins and had numerous friends everywhere he went (which was a common theme in his life). Over the years many people came, went, came back, and even went again from his life. He always seemed to remember a person and the good times they had. Everyone was welcomed and valued, regardless of how long they stayed. Jim attended Fresno High School, graduating in 1959. From there he jumped into life at full speed, excited to do anything that interested him. His interests almost always revolved around helping people in his community. Professionally, life took him into the medical field as an orderly (now called a CNA) at the Beverly Hills hospital where he treated many celebrities. In the 1960s Jim held meetings in coffee shops around San Francisco to mentor disillusioned peers of the Summer of Love era. His voice was heard throughout the western United States as a DJ and on-air radio personality. His proudest professional achievements came later in life. After earning degrees from Northeastern Junior College, Colorado State University, and Iliff School of Theology, Jim was a social worker and therapist. In Fort Collins, Colorado, he established a community kitchen, shelter, and food bank. He worked for several organizations including North Range Behavioral Health in Greeley, Colorado, and Cheyenne Regional Medical Center in Wyoming. Even in retirement Jim was dreaming big. He became a prolific writer, self-publishing several fiction and nonfiction books and ghostwriting or editing many others. Jim prided himself with having an eclectic blend of Christianity, Native American and Buddhism traditions. Jim grew up with a love of fast cars and racing, spending much of his youth at his father’s Pontiac dealership in Fresno. Among their regular customers was the legendary Indy 500 winner Bill Vukovich. He followed NASCAR throughout his life and amassed a large collection of Jeff Gordon memorabilia. Fittingly, part of his last 24 hours on Earth was spent with a NASCAR race on the television in his room. In the midst of his adventures Jim met and fell in love with Christy Lee Maddox. They were married on December 10, 1972. Together they had three children: Cameron James and his wife Marysol of San Antonio, Texas; Cheyenne Chantne Carpenter of Cheyenne, Wyoming; and Carl James-Maddox and his wife Jenna of Davis County, Utah. He has five surviving grandchildren, Allison Lee, Zoe Amberly, Thompson James, Patrick Vermont, and Christopher Randel. He has three surviving children from a previous marriage: Jenny, Jon, and Joy. Jim is also survived by his sister, Pamela Orta Aldrich of Sacramento, California; several cousins in the central California area; and innumerable friends from almost everywhere he went. Over the past 15 years, Jim connected with members of his birth family: a half-brother, Mike Owens, and half-sister, Laurel Owens LeCheminant. Preceding Jim in death are a son, James Jr., a granddaughter, Ashley, his parents, and innumerable extended family and friends. Cremation has taken place by Wiederspan-Radomsky Chapel. An informal outdoor memorial service will be held at a later date. If you would like to receive information about the service, please contact his family or fill out this brief form: https://forms.gle/dR5zqTcWYNwU64in6 Special thanks to the staff of Davis Hospice Center. Particularly Chaplain Dave who had been a longtime personal friend and advisor to Jim and generously gave much of his own personal time to be available to him and his family even when their relationship blurred the lines of personal and professional.

The family of James "Jim" S. Aldrich created this Life Tributes page to make it easy to share your memories.

Send flowers to the Aldrich family.