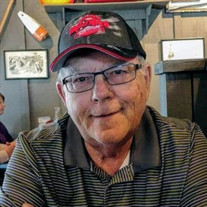 James William “Jim” Davis, 80, of Cheyenne, died on March 31, 2022 peacefully in his home, in Cheyenne, WY. He was born on October 5, 1941 in Springfield, Missouri to Erman and Ruth Davis. He married his high school sweetheart Peggy Rook in 1960 and had three children Michael, Amy and Christopher. Jim was a salesman through and through. His career started with Sears and Roebuck as a janitor at 18 years old. He quickly advanced into more managerial positions, each time climbing that ladder of success. With each advancement in his career, it meant another move to a new home, city, and state for him and his growing family. Jim dedicated his life to Sears for over 35 years. He retired in 1994 as the store manager of the Colorado Springs Sears and moved a final time, back to his home in Cheyenne, WY. During his retirement he was involved in numerous endeavors and ended up back in sales, where he sold spas, fireplaces, and managed the growth of that business for 17 years. What Jim loved most about working was visiting with people every day. He is survived by his children, Michael and Katherine Davis, Amy and Daryl Phillips, and Christopher and Melinda Davis; and his grandchildren, Ashley, Joshua, Samuel, Joseph, Bodhi, and Gunner. Jim was also blessed with two great granddaughters, Sloane and Kambel. He has sister in-laws, a brother in-law, nephews, and nieces that will miss him as well. Jim was preceded in death by his beloved wife of 49 years, Peggy; both of his parents, Erman and Ruth; his sister, Kay; and his in-laws, Miles and Eldora. Graveside services will be Thursday, 1:00 p.m., at Mountain View Memorial Park. In lieu of flowers, the family asks that you make donations to the Laramie County 4-H and Wyoming FFA programs in his name.

The family of James William Davis created this Life Tributes page to make it easy to share your memories.

Send flowers to the Davis family.