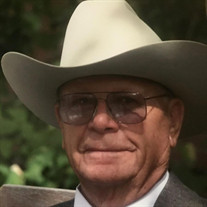 James T. “Ted” Barry, 95 of Cheyenne went to be with his Lord and Savior on Sunday, August 29th. Ted was born in Midwest, WY on November 21, 1925 and lived most of his life in Wyoming. He grew up on the family ranch on Antelope Creek in Northeastern Wyoming and attended school there and in Laramie. He was a proud native son. Ted was the third of four sons born to Clifford and Reba Barry. He married the love of his life, Marie Tefertiller on February 22, 1945 and they raised a son and three daughters together. For a decade Ted and Marie ranched together in Southern Colorado and Oklahoma returning to Wyoming in 1955. While not always making a living as a cowboy, he always lived his life as one. Ted worked for the Laramie Fire Department for 18 years, retiring from there to go to work for the Wyoming State Fire Marshall’s office in Cheyenne while commuting from Burns. In 2009 they moved to Cheyenne. Ted and Marie spent over 70 years devoted to each other and their family until Marie’s passing September 26, 2015. Ted remained devoted to Marie and his family until his final breath. Ted had a life-long passion for horses, focusing all of his married life on raising foundation bred American Quarter Horses. He was a loving and devoted husband, father, grandfather and great-grandfather. Ted is preceded in death by his wife, Marie and survived by his children Scott (Jan) Barry, Linda (John Goodman), J.B. Barry, and Joy (Martin) Nee; his grandchildren, Dusty, Mark, Cody, Erin, Teddi Marie, Abbey, Catlain, Maggi, Cassidy, Josh, Matt and Bryan; 21 great-children; his brother Bill Barry; and numerous nieces and nephews. “I have competed well; I have finished the race; I have kept the faith.” 2 Timothy 4:7 Services will be held at 10:00 am Saturday, September 25th at Wiederspahn-Radomsky Chapel in Cheyenne with internment at Lakeview Cemetery for both Ted and Marie to follow. In lieu of flowers donations may be made to St Judes children’s hospital.

The family of James T. Barry created this Life Tributes page to make it easy to share your memories.

Send flowers to the Barry family.