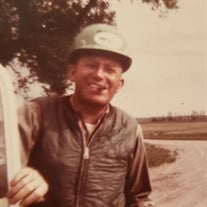 Jack Bennett (Jr), 92, died peacefully in his sleep, May 19, 2022, at 12:40 p.m., in his home near Temple, Texas. He was born August 22, 1929, in Webster City, Iowa, to John (Jack) Avery Bennett and Lillian (Johnson) Bennett. Jack grew up in farming communities and attended high school in Owasa, Iowa, where he participated in baseball and basketball and excelled in school, to the extent he was offered a college scholarship. He joined the US Navy and was stationed at Norfolk, VA, as an Aviation Storekeeper. Jack married Dorothy Bullis, November 1,1949, in Iowa Falls, IA, and later married (Mary) Carolyn Holladay Donnelly, December 21, 1964, in North Dakota. He worked as an Ironworker most of his life holding positions of Foreman and Site Superintendent and working on several dams, missile sites, power plants, airports, etc., in CA, AZ, SD, ND, WY, IN, MO, NE, WI, MN, ID, and AK. He also installed home siding for a time after retiring from ironworking. Jack and Carolyn retired in Cheyenne, WY, and then relocated to Texas to be near his daughter, Kathleen. Jack was charismatic and very personable with a million-dollar smile. He enjoyed cards and dominoes and played a mean game of cribbage, was an avid reader, enjoyed a wide variety of movies, but especially Westerns. Jack is survived by his brother, Gene; six children from his marriage with Dorothy; Linda (Darcy) Gibbins, Stephen, Susan (George) Kendrick, Patricia Warrior, Kathleen Simon, and Thomas, and their children and grandchildren; and three stepchildren from his marriage with Carolyn; Steven (Katherine), Michael (Karen), and Kathy (David) Laymon and their children & grandchildren. He was preceded in death by his parents, both of his wives, and his sister, Vivian. There will be a graveside service Wednesday, June 8, 2022, at 2:00 pm., at the Cheyenne Memorial Gardens. In lieu of flowers, donations to hospice would be appreciated: Community Healthcare of Texas, 6100 Western Place, Suite 105, Fort Worth, TX 76107, (800) 735-2098

The family of Jack Bennett, Jr. created this Life Tributes page to make it easy to share your memories.