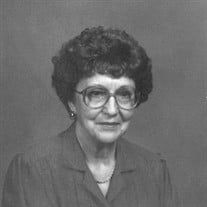 Helen Jean Ruth Ziemann, died January 14, 2021 in Centennial, Colorado. Helen was born February 10, 1926 on the Sailer family farm in Krem, North Dakota. She attended a small country school with all eight grades in one room. She graduated from Hazen High School in Hazen, North Dakota in 1944. Helen married Harold Ziemann November 5, 1944. They had five children. They farmed the first nine years of their married life while Harold also worked in the construction business. Helen became adept at driving the tractor and hauling grain with a big truck to the elevator in town. She always had a big garden and did lots of canning in the fall. She also raised chickens and geese. After the construction of the Garrison Dam in North Dakota, where Harold was employed, was completed, they moved to Wyoming in 1957 where Harold continued in the construction business. He died March 20, 1975. After Harold died Helen went to Laramie County Community College in Cheyenne, Wyoming and obtained an Associate in Applied Sciences degree. She was employed by the Wyoming Secretary of State’s office. She retired as assistant director of the Corporations Division. After her retirement she kept busy with church activities, her sewing and crocheting projects, and family activities. Helen is survived by two sons, Mark (Kathy) Ziemann and Jerome Ziemann of Cheyenne, one daughter Barbara (Tom) Cisneros of Centennial, Colorado, and one daughter-in-law Dianne Ziemann of Cheyenne. Also four sisters-in-law, Deloris Sailer, Oregon, Patsy Sailer, West Virginia, Lorina Zuern and Adeline Ziemann, North Dakota, 14 grandchildren, one step-grandchild, 24 great-grandchildren, and one great-great-grandchild. She was preceded in death by her husband, Harold, one son, Stuart Ziemann in 2004, one daughter, Betty Thomas in 2013, one great-grandchild, her father Adam and mother Pauline Sailer, nine brothers and three sisters. Helen was the last survivor of 13 children. Viewing of the deceased will be on Saturday from 9-4 PM at Wiederspahn-Radomsky Chapel. Services will be held Monday, January 25 at 2:00 p.m. at Trinity Lutheran Church with Pastor John Preus officiating. Burial will follow at Cheyenne Memorial Gardens. Memorials may be given to Trinity Lutheran Church.

The family of Helen Jean Ruth Ziemann created this Life Tributes page to make it easy to share your memories.

Send flowers to the Ziemann family.