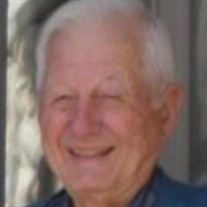 Harry Marshall Huson passed away April 13, 2022, in Casper, Wyoming, with his daughters by his side. He was born in Sheridan on October 5, 1928, to Mae Chase and Harry H. Huson. He attended schools in the Arvada/Clearmont area graduating from Clearmont High School in 1946. While attending school in Arvada, he met, and in 1947, married Vera L. Dabney. From this marriage, three daughters were born: Marsha, Lucinda (Cindy), and Karen. The family lived in Newcastle and Casper before he and Vera moved to Laramie where he graduated from the University of Wyoming in 1970 with a degree in Mechanical Engineering. They then moved to Cheyenne to continue his career with the Wyoming Highway Department; and after 39 years of service, he retired in 1988. He especially enjoyed spending time with family hiking, fishing, and snowmobiling at the cabin in the Big Horns. In retirement, you could find him on the golf course in the summer, and in the winter he and Vera traveled extensively, spending many winters in Tucson. He was a life-long member of Newcastle Masonic Lodge #13, Sheridan Scottish Rite (receiving an Honorary 33rd Degree), Kalif Shrine of Sheridan, and Korein Shrine of Cheyenne (Frontiersmen’s Group). He volunteered for Meals on Wheels as a driver and as a repairman of machines to resell at their Thrift Store for over 35 years. He is survived by a brother Russell (Joyce) of Buffalo; two daughters, Marsha (Jim) Milek and Karen Kastner of Casper; five grandchildren Doug (Anna) and Janet (Matt Hahn) Milek, Chris (Natasha), Rich (Lauren) Kastner, and Mandy (Wes) Roberts; and 12 great-grandchildren. He was preceded in death by his parents; wife of 59 years Vera; brother Ed Huson; daughter and son-in law Cindy and Don Sutphin; granddaughter Angie Sutphin; grandsons Donnie and Jimmy Sutphin; and great-granddaughter Amelia Roberts. Services will be held at Wiederspahn Radomsky Chapel of the Chimes in Cheyenne, Saturday, April 30, at 10:30 a.m. Cremation has taken place at Bustard Jacoby Funeral Home in Casper. Interment will be in Buffalo at the Willow Grove Cemetery. Friends may donate in Harry’s name to Meals on Wheels (2015 S Greeley Hwy, Cheyenne 82007) or the Shriners Children Hospital (1275 Fairfax Rd. Salt Lake City, Utah 84103).

Harry Marshall Huson passed away April 13, 2022, in Casper, Wyoming, with his daughters by his side. He was born in Sheridan on October 5, 1928, to Mae Chase and Harry H. Huson. He attended schools in the Arvada/Clearmont area graduating from... View Obituary & Service Information

The family of Harry Huson created this Life Tributes page to make it easy to share your memories.

Send flowers to the Huson family.