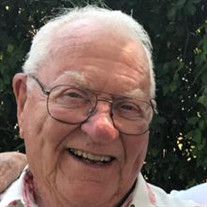 Harold Ray Lutz, 93 of Cheyenne passed away peacefully November 23, 2020 at Davis Hospice Center with Nancy, his wife of 51 years, by his side. Born September 3, 1927 in Boulder, Colorado, Harold was the second son of Maude Mercy (Tyson) and... View Obituary & Service Information

The family of Harold Ray Lutz created this Life Tributes page to make it easy to share your memories.

Send flowers to the Lutz family.