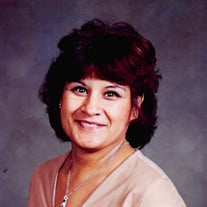 Heaven has gained another Angel. Gloria Chavez Chanco, 73, passed away on August 11, 2021 due to complications of dementia and other major health issues. Gloria was a long-time resident of Cheyenne until about 14 years ago. She relocated to Deming, New Mexico along with her long-time partner Leon Charco to operate a RV park. Gloria returned to her hometown of Cheyenne due to her failing health, to be cared for by her daughter and son in law. Gloria was a woman of many talents. Her life long passion was working with children. Gloria started working with children in her early 20’s, working as a Headstart aide. She advanced to working as a child care teacher and for the next 40 plus years she worked at three child care facilities in Cheyenne: Orchard Valley Day Care, La Petite Academy, and Diamonds in the Rough. Everyone loved “Ms. Gloria” as they called her. Every child wanted to be in her class because she had the coolest toys and treats. In addition to her greatness as a child care teacher, she was an excellent cook. Mexican food was her specialty. She was mentored by the owner of a former restaurant called Armando’s. Armando’s was known as an authentic south side little hole in the wall Mexican food restaurant. Due to this, she blossomed into a great Mexican food cook. Gloria was such a giving and generous person. She would give even if she went without. Though Gloria’s health was failing, few people knew the extent to which she struggled. Despite her illness, she always tried to push through her frustration with a big smile. Gloria loved her Coca Cola, and peanut butter and jelly sandwiches. It was her daily fix. So, when you have one of these eats, think of Gloria and smile. Gloria is survived by her daughter Jessica (Richard) Camargo of Cheyenne; sons Scott A. (Melody) Martinez of Las Cruces, NM, and Toby (Cheryl) Martinez of Marion, IL; her longtime partner Leon Chanco; sisters Dominga Chavez of Cheyenne, Caroline Chavez of California, and Helen Acosta of Abilene, TX; brothers Primo Chavez of Cheyenne, and Johnny Chavez of California; grandsons Chris, Jacob, Elias and Ricardo Camargo, Josh and Carlos Martinez; granddaughter Cheyenne Martinez; 14 great grandchildren; two great, great grandchildren; and numerous nieces and nephews. Gloria was preceded in death by her parents Domingo Baca Chavez and Jessie Solis Chavez; grandson Elijah Martinez-Camargo; and numerous other family members. Gloria’s journey on earth may have ended but she is now starting a new journey in heaven. A memorial service will be held at 10:00 am on Tuesday, August 17, 2021 at the St. Joseph’s Catholic Church. Interment of the ashes will occur immediately following the service at Mt. Olivet Cemetery.

Heaven has gained another Angel. Gloria Chavez Chanco, 73, passed away on August 11, 2021 due to complications of dementia and other major health issues. Gloria was a long-time resident of Cheyenne until about 14 years ago. She relocated... View Obituary & Service Information

The family of Gloria V. Chanco created this Life Tributes page to make it easy to share your memories.

Send flowers to the Chanco family.