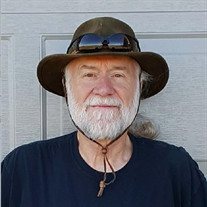 Bud (Glenn) Gosbee, a longtime resident of Cheyenne, Wyoming passed away on April 5th, 2021, at the age of 67. Bud is survived and missed by his wife, Sharon Eskam, and his sons Buddy (Glenn) Gosbee Jr., Jonathan Hampe, Tucker Gosbee, and Dylan Eskam Gosbee; his mother Elizabeth Gosbee, brothers Steve Gosbee and Don Gosbee, and sister Donna Gosbee. He adored his grandchildren; Wyoma Gosbee, Winter Gosbee, and Wyatt Hampe. He was preceded in death by his father David Gosbee, and his brother Pat Gosbee. Bud was born in Mobile, Alabama on January 26th, 1954 to David and Elizabeth Gosbee and graduated from Central High School in Cheyenne, Wyoming. He attended college at LCCC and earned several computer certifications later becoming an auto parts specialist at various local automotive dealerships. He was known as the self-described “part’s God” of Cheyenne and even answered the phone accordingly; demonstrating his incredible sense of humor and bravado. He was absolutely fearless; be it with a car, a motorcycle, or his fists, and he never backed down from either a fight or a challenge. On September 24th, 2002 he married his soul mate, Sharon Eskam in Las Vegas, Nevada with his youngest son perched on his shoulders during much of the ceremony because that was the way Bud did things. Bud always loved children, and with his larger-than-life personality, they always loved him back. Bud was a true original who lived life unapologetically and on his own terms. Bud loved his family, classic Mopar cars, Coors Original Banquet Beer, and “tinkering”. He could make anything work from an old car to a chicken-plucking machine. He was brilliant although he kept that hidden unless you knew him well, a problem-solver who worked hard and played even harder. In his younger days, he enjoyed racing stock cars and running in demolition races. He remained an adventurer all of his life and there was never a dull moment when Bud was around. His later life hobbies included rebuilding classic Mopar muscle cars, fixing everything in the most unconventional way possible, and making everyone laugh with his own big booming laugh. He was an amazing husband, father, son, uncle, and brother who possessed a heart of pure gold and who will be sincerely and sadly missed but never forgotten, by everyone who was a part of his life. A celebration of his life is scheduled for May 1st at 2:00 PM 60368 County Road 19, Mitchell Nebraska in the Gosbee tradition of barbeque, beer, family, friends, and reminiscing. For those unable to attend in person a zoom link will be provided. Please contact a family member for the link and the passcode.

Bud (Glenn) Gosbee, a longtime resident of Cheyenne, Wyoming passed away on April 5th, 2021, at the age of 67. Bud is survived and missed by his wife, Sharon Eskam, and his sons Buddy (Glenn) Gosbee Jr., Jonathan Hampe, Tucker Gosbee, and Dylan... View Obituary & Service Information

The family of Glenn Paul "Bud" Gosbee created this Life Tributes page to make it easy to share your memories.

Send flowers to the Gosbee family.