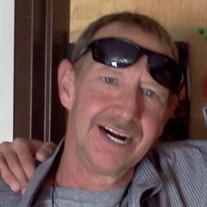 Gerald “Jerry” David Stipe 1955-2020 (65) passed away on September 20, 2020 after fighting a long battle with cancer. Jerry was born in Lusk, WY to Jack and Ann Stipe on 6-17-1965. Shortly after he was born the family moved to Sinclair, WY where Jerry attended school and graduated from Rawlins High School. He grew up with an older sister and four older brothers. Jerry was the baby of the family. Jerry moved from place to place trying to find his niche in life until he landed right back in Sinclair and met his wife. They had three children – Jebidiah, Zachary, and Joshua. At this time, he became a successful crane operator. Jerry eventually moved to Cheyenne. He volunteered at the Comea Shelter for many years and met and cared for many people, which inspired him to write and publish the book “The Forgotten Ones”. Jerry was very creative and loved woodworking, helping people, laughing and was known as “the jokester”. He had so many life experiences to share! He is survived by his three boys, Jebidiah, Zachary (Nikole), and Joshua, nine grandchildren, Kaleb, Jordan, Mariyah, EiyTana, Calvin, Chase, Alexis, Colton, and Jaxon. His sister Sharron (Bob) Vermillion, Eddie (Jacky) Stipe, Robert (Mayra) Stipe. Nieces Tracy Wiley, Brandi Johanson, Heather Stipe, Nephews Tommy Vermillion, Jeff Stipe, Robert Stipe, John Stipe, Mateo Stipe, Emilio Stipe, and Rodger Stipe, many close friends and his family at the Comea Shelter and Wyoming Motel, and his sweet dog Angel. He was proceeded in death by his parents Jack and Ann Stipe and his brother Richard Stipe. Cremation has taken place and a celebration of life will be held at The Wyoming Motel Wednesday September 23 at 2pm with Pastor Vern Sissick officiating. The family ask that in lieu of flowers donations be made to The Comea Shelter.

The family of Gerald "Jerry" David Stipe created this Life Tributes page to make it easy to share your memories.

Send flowers to the Stipe family.