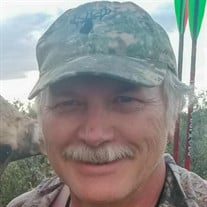 George E. Sullivan was born September 10, 1956 to Marjorie A. Sullivan and Robert B. Sullivan. George unexpectedly passed away June 14, 2021. In his youth he spent countless free time out on the family ranch with his grandparents George Wichman and Mildred Wichman. He graduated from Central High School in Cheyenne, Wyoming in 1974. He then went on earn a degree in computer sciences from Laramie County Community College. From there he began his 45-year career at the Wyoming Department of Transportation as the Senior Design Specialist II. His meticulous attention to detail allowed for the lines, accel lanes, easements and many other aspects of the highway system you see today to be drawn out and executed flawlessly. George married Deborah (Deebs) L Sullivan on August 31, 1991. In their over 30 years together they collected numerous memories from camping trips, Cheyenne Frontier Days events, and family outings. George quickly added to his leatherwork knowledge with fabric knowledge, helping Deebs with the geometry of her quilts. He had a special way of researching the best fabric to add to her hobbies. Whether it was Saturday morning breakfast, a quick drive, camping, fishing or sitting on the deck George loved filling his free time with the company of his wife. George walked many miles throughout the park of Cheyenne Frontier Days. He was a founding member of the Tickets Committee. He started as a handicap cart driver assisting spectators to their destination and ended as an advisor passing along the tradition for those developing their leadership skills. He competed in many wild horse races and rode dead sleds in the chuck wagon races. He was inducted into the Cheyenne Frontier Days Heels in 1994. This year marks his 40th year as a Cheyenne Frontier Days Volunteer. George was a dedicated volunteer for the fireworks show put on every year on the 4th of July. There were many years he took his wife and daughter up to the display as he was dropping shells and gave them a front row seat to the show. George was an avid outdoorsman. He spent over 25 years guiding for Table Mountain Outfitters. Guiding became less once his daughter Amber L. Sullivan was born in September 1994. He then took on the selfless job of guiding her through all her outdoor adventures and life lessons. George was a pillar of the trap shooting community in Cheyenne. He partook in abundant leagues, ATA shoots and helped Amber with any “fun shoot” idea she created. George had a passion for passing on his love for the great outdoors and wildlife to his daughter. It was a year long planning event getting ready for all the hunting trips. Any individual who showed interest in shooting, hunting, or the outdoors he ensured that they were given an unforgettable first experience and was always there to mentor them along the way. George was an active member of the Korien Shriner’s and Scottish Rite Masons. He was on the board for the Korien Shriner’s, part of the Indians with the Korien Shrine, 32nd degree mason and Scottish Rite consistory member. Through these dedicated years of service and devoted Christian faith he was able to support numerous children of need at the Shrine Children’s Hospital in Salt Lake City, Utah. He devoted time and efforts to support the hearing clinic for children in Cheyenne. George never knew a stranger. He was always willing to jump in lend a hand and support any individual that crossed his path. His dedication to the community of Cheyenne and his humanitarian spirit will live on. George is survived by wife Deborah Sullivan, daughter Amber Sullivan, brother Jay (Cyndi) Sullivan, nephew Zachary Sullivan, niece Lauren Sullivan and niece Brooklynn Sullivan and numerous loved cousins. He was preceded in death by his parents Robert and Marjorie Sullivan, and aunt Helen Frye. A Celebration of Life will be held on Sunday, August 15, 2021 at 3:00 pm at the CFD Event Center. Please dress in jean and boots, or comfortable attire. Memorials may be made to the Shriner’s Hospitals for Children, Cheyenne Frontier Days Crisis Fund, Cheyenne Trap and Skeet Club or any organization supporting wildlife conservation.

George E. Sullivan was born September 10, 1956 to Marjorie A. Sullivan and Robert B. Sullivan. George unexpectedly passed away June 14, 2021. In his youth he spent countless free time out on the family ranch with his grandparents George Wichman... View Obituary & Service Information

The family of George Earl Sullivan created this Life Tributes page to make it easy to share your memories.