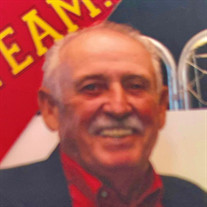 George Richard “Dick” Anthony, 84, passed away at his home on Wednesday, September 1, 2021. Dick was born in Carlisle, Pennsylvania on February 5, 1937 to George and Dorothy Anthony. After graduation from Chambersburg High School, Dick enlisted in the United States Air Force and he served as a Radar Technician. He finished his military career in Cheyenne, Wyoming in 1959. He lasso’d a beautiful Wyoming girl, Kay Fintus, at the stock car races in the fall of 1959. They were married May 2, 1960 and welcomed their first daughter, Kelley Kay the same year. Shortly after her arrival he began working in the family business, Automatic Electric. Two more children, Shurie Rae and Theodore Richard, joined the family. He loved helping them with their 4-H endeavors, showing horses, steer, pigs, and sheep. Dick enjoyed serving the community through his business and made many lifelong friends. He volunteered with the local Kiwanis chapter, and enjoyed flipping flapjacks at the Pancake Breakfast and serving at the Clam Bake Events. He was involved in the Downtown Association, which promoted downtown businesses and events. He served on the Board for the Cheyenne Regional Airport, and was the Broadcast Spotter for the local high school football games. He coached Senior Babe Ruth baseball for the Kilowatts. He loved helping his brother-in-law, Don, with the Berry Bull Sale. In 1997, his entrepreneurial ambitions enabled him to realize his dream of opening a gourmet kitchen store in downtown Cheyenne. He enlisted the help of his son and daughter-in-law, Ted and Susan “Blondie” to begin The Prairie Pantry, which is celebrating a legacy of a 25-year anniversary next year. Upon selling Automatic Electric, Dick and Kay retired to Torrington, Wyoming where they lived for 12 years. He invested himself in serving and finding community with Bethel Baptist Church. Dick also now had more time to pursue his passion of golf, and he played as often as he could. He loved his job at Cottonwood Country Club where he took pride in mowing the course and keeping the greens pristine. He was also an adamant Wyoming Cowboy fan and spent many hours cheering on the teams. Dick was a family man who loved spending time with his loved ones. He was often found in the kitchen cooking big meals for all, especially cream can dinners. He had a strong faith and was a shining example of what it meant to be a Christian. He strove to live by the Word and encouraged others in their faith. Dick was a man of few words, but what he said always had meaning. Phone calls with Dick were brief but he would always end the call with his grandchildren, “Keep the Lord in your life, Bud.” Above all, what Dicky-Doo loved more than anything in the world was Kay. She was the love of his life and he would have done absolutely anything for her. Dick is survived by his wife Kay, children Kelley Kuhlman (Jay) of Kihei, Hawaii, Shurie Anthony, and Theodore Anthony (Susan), both of Cheyenne, Wyoming. Grandchildren Bridget Carter, Justin (Gabriela) Kuhlman, Jakob (Taylor) Kuhlman, Brentton (Bailey) Anthony, and Zane Anthony. Great-grandchildren Sofia Martinez, Macey Martinez, Kailani Kuhlman, Zoe Kuhlman, Dominic Gentry, Jackson Gentry, Brandon Kuhlman, and Ryan Jane Kuhlman. Dick is also survived by his brother Jerry (Ruth) Anthony, of Shippensburg, Pennsylvania, and sister-in-law Dorothy Anthony of Joplin, Missouri along with numerous nieces and nephews. Dick was preceded in death by both of his parents, step-mother Jean Anthony, and brothers Ron (Mae) Anthony and Bill Anthony. Honorary pallbearers will include Wayne Brown, Ron Tooley, Bob Fintus, Don Berry, Jay Kuhlman, Mike Elsasser, and David Johnson. We would also like to recognize his buddies at the Torrington Cottonwood Country Club Golf Course. Services will be held on September 9, 2021, at 3:00 p.m. at the Calvary Chapel, 9209 Ridge Road Cheyenne, Wyoming with full military honors. The family invites the public to attend the service, and join us for a cream can reception following. Donations can be made to the Eastern Wyoming Community College Golf Team or Fellowship of Christian Athletes in lieu of flowers. And Dick, don’t forget to watch for deer in Heaven.

George Richard &#8220;Dick&#8221; Anthony, 84, passed away at his home on Wednesday, September 1, 2021. Dick was born in Carlisle, Pennsylvania on February 5, 1937 to George and Dorothy Anthony. After graduation from Chambersburg High School,... View Obituary & Service Information

The family of George Richard "Dick" Anthony created this Life Tributes page to make it easy to share your memories.

George Richard “Dick” Anthony, 84, passed away at his home on...

Send flowers to the Anthony family.