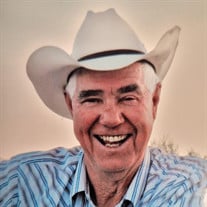 Gary Wayne Herold, 85, passed away July 29, 2021, after a lengthy illness at the Cottonwood Creek Memory Care facility in Cheyenne, WY. Gary was born December 7, 1935, on the family ranch outside of Baggs, Wyoming. He was the youngest of seven children born to Joseph and Lillian (Byars) Herold. Gary attended the one room schoolhouse on the banks of the Little Snake River before attending school in Baggs. He graduated from Little Snake River High School in 1953. Gary then went on to the University of Wyoming where he rode saddle broncs and participated in Farm House before receiving his bachelor’s degree in Agriculture in 1957. Gary was inducted into the U.S. Army on April 8, 1958. He was stationed in Germany, earning a Good Conduct Medal and an Expert Badge (Rifle) before his Honorable Discharge on April 6, 1960. He returned to Wyoming where he went to work for the Soil Conservation District (SCS), being assigned to Thermopolis WY. There he married Karen Eileen Waliser on April 26, 1963. After moves to Medicine Bow, WY and Pinedale, WY, Gary left the SCS to ranch in Saratoga. Eventually he went to work for Arch Mineral in Hanna, achieving the position of Director of Permits before taking the position of Director of Public Works for the Town of Saratoga from which he retired in 2001. Growing up on the ranch, Gary developed a strong work ethic. He had an affinity for dogs and horses. He was a horse-whisperer who would take on horses that others found difficult. He loved the outdoors, enjoying hunting, fishing, and seeing new country on the back of a horse. He was always up for a road trip driving his family to Alaska and back, day trips in the desert or mountains, and helping his children move no matter how far away it was. He was a strong supporter of education including extra-curricular activities and served on the Carbon County school District #2 Board in the early 1980s. He was a gardener, a master putter-er and an avid reader, enjoying westerns, histories, and mysteries the most. Gary was preceded in death by his parents and siblings. He is survived by his wife of 58 years Karen of Saratoga, son Tim (Renee) Herold, son Greg (Lisa) Herold, daughter Anita Herold, granddaughter RanDee (Mason) Ochinero, grandson Colin Herold, granddaughter McKenzie Herold, granddaughter Annelisa Herold, grandson Eric Herold, three (soon to be four) great granddaughters and numerous nieces, nephews, great nieces, and great nephews. In lieu of flowers, the family asks that donations be made to the Alzheimer’s Association or a charity of your choice. No services planned at this time.

Gary Wayne Herold, 85, passed away July 29, 2021, after a lengthy illness at the Cottonwood Creek Memory Care facility in Cheyenne, WY. Gary was born December 7, 1935, on the family ranch outside of Baggs, Wyoming. He was the youngest of seven... View Obituary & Service Information

The family of Gary Wayne Herold created this Life Tributes page to make it easy to share your memories.

Send flowers to the Herold family.