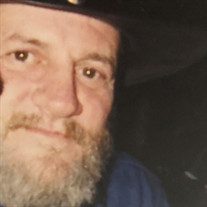 Garry “Hillbilly” Gillett passed away peacefully at the Cheyenne Regional Medical Center in Cheyenne, after a long battle with cancer. He was born on August 25, 1947 in Crabtree, North Carolina. Garry was a master mechanic and loved any car, running or not running, old or new, any truck (Mater was his favorite truck) and anything that had moving parts filled with grease, oil, dirt and posed a challenge to repair. He worked at Buzz’s transmission for many years and you could always stop by for a cold “soder” and a “shootin the breeze session” at the Sinclair Station. Garry never retired from trying to make people happy. He was a kind, generous, gracious man who had many talents. He loved the outdoors, and his favorite hobby was collecting knives. He loved woodworking and carpentry when he was not mechanically overloaded with work. Garry was very well known to the travelling bands throughout numerous states for many years. If not for his mechanical talents, when the buses, trucks, cars, trailers broke down many of them would have not made their “gigs” on time. You could say he became a “dad” to many of them, nurturing their careers and supporting their musical careers in and out of the clubs. He is survived by his best friend and loving wife Cris Gillett, his mother-in-law Louise Alvarez. Cris and Garry were married on December 11, 1981 and have spent the last 40 years celebrating their life together with their families and hundreds of friends. Garry has two daughters Cissy (David) Chambers and Cindy (Larry) Fugate, a son Tim (Lisa) all living in North Carolina. He has seven grandchildren and nine great grandchildren. If Garry would have started a Facebook page, his “friends with” would have been in the thousands. He was a very loved man. Garry was preceded in death by his parents Walker and Maggie Gillett, beloved father-in-law Adolph Alvarez, and brothers Howard and Jim Gillett. In lieu of flowers please make a donation in honor of Garry Gillett to the Cheyenne Regional Cancer Center, 214 East 23rd Street, Cheyenne, WY 82001. Always remember “The Greatest of All Gifts Are Your Families and Friends.” A memorial service is scheduled for Saturday, August 7, 2021 at 2:00 pm at Wiederspahn-Radomsky Chapel.

Garry &#8220;Hillbilly&#8221; Gillett passed away peacefully at the Cheyenne Regional Medical Center in Cheyenne, after a long battle with cancer. He was born on August 25, 1947 in Crabtree, North Carolina. Garry was a master mechanic and... View Obituary & Service Information

The family of Garry B. Gillett created this Life Tributes page to make it easy to share your memories.

Garry “Hillbilly” Gillett passed away peacefully at the Cheyenne...

Send flowers to the Gillett family.