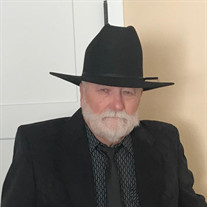 Frank M. Fritz passed away unexpectedly on August 28, 2021 at his home in Cheyenne WY. Frank was born on September 18, 1940 in Colorado, to Doris (Kindvall) and Earl Fritz. Frank was raised on the family farm in Pine Bluffs, WY. He received his education in Egbert and graduated from Pine Bluffs High School in 1958. After graduation he enrolled in the Army Reserves and upon completion he entered the Plumbers Apprenticeship. Frank spent the next 5 years working and attending night school obtaining his Journeyman’s License, and years later completed his Masters License. Frank and his brother, Wayne Fritz, formed the Early Plumbing, which was named after their father. Due to the 80’s recession they had to close the business and Frank took his craft to the road. Frank moved to Nevada, California, and finally landed in Virginia where he retired. He then returned to Pine Bluffs in the early 2000’s to help his mother take care of the farm. He did part-time plumbing work in Wyoming during this time period. In 2011, Frank began dating Brenda Rath, who had been introduced by a mutual friend. Brenda and Frank enjoyed each other’s company and shared a lot in common. They loved attending the University of Wyoming Basketball and Football games together, and trap shooting. They spent weekends watching NASCAR races along with other professional sporting events. Frank and Brenda were married on April 1, 2019. Frank is survived by his loving wife, Brenda Rath-Fritz; stepsons, Jim Rath of Cypress, TX and Tom Rath of Cheyenne, WY; three stepgrandchildren and four step great-grandchildren; his siblings, Darline Butler of Pine Bluffs, WY, Arline Christensen of Casa Grande, AZ, Mildred Meroney of Great Bend, KS, Wayne Fritz of Bullhead, AZ and Karol Smock of Grover, CO along with numerous nieces and nephews. Preceding Frank in death were his parents; and his sister, Marcia Johnson. Pallbearers are Greg Fritz, Jeff Johnson, Jim Rath, and Tom Rath. Services will be held at Wiederspahn-Radomsky Chapel on Thursday, September 2nd, 2021 at 1:30pm. Interment will follow at 3:30pm at the Pine Bluffs Cemetery, 1000 County Road 164, corner of Beech and 10th, Pine Bluffs, WY In lieu of flowers and gift, you can make a donation to Meals on Wheels or a charity of your choice in Memory of Frank. Frank will be buried wearing his favorite pair of Cowboy boots.

Frank M. Fritz passed away unexpectedly on August 28, 2021 at his home in Cheyenne WY. Frank was born on September 18, 1940 in Colorado, to Doris (Kindvall) and Earl Fritz. Frank was raised on the family farm in Pine Bluffs, WY. He received... View Obituary & Service Information

The family of Frank M. Fritz created this Life Tributes page to make it easy to share your memories.

Send flowers to the Fritz family.