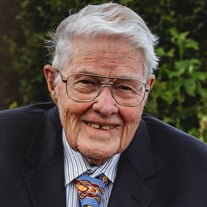 Frank Maurice Cole, 86, passed away early on Nov. 29, 2021, at his residence in Cheyenne, WY, with his family at his side. Frank was born to George and Mary Cole on July 28, 1935, in Cheyenne where he grew up. He graduated from Cheyenne High... View Obituary & Service Information

The family of Frank Maurice Cole created this Life Tributes page to make it easy to share your memories.

Send flowers to the Cole family.