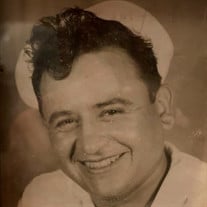 Florentino “Tino” Araguz, 93, of Pine Bluffs, Wyoming, passed away on February 9, 2022. He was born October 16, 1928 in McAllen, Texas, to Aracario and Manuela Araguz, the youngest of 5 children. He enlisted in the Navy in 1945 and proudly served in WWII, Korea, and Vietnam. He met and married Nora Clark in 1982 in Elizabeth City, North Carolina. After traveling around to Virginia and Texas, the couple decided to reside in Wyoming and make Pine Bluffs their home. He was a people person and was involved in jail ministry and women's prison ministry, reaching far and wide around Wyoming and Colorado and beyond, for 27 years. He is survived by his loving wife, of almost 41 years, Nora Araguz, from Cheyenne, WY; two sons, Timothy John Araguz from Leeds, Mass., and Terence Araguz from Port Orange, Florida; two grandchildren and two great-grandchildren, and numerous nieces and nephews. He is preceded in death by his parents, two grandchildren, three sisters; Trina Araguz, Consuelo Araguz, and Esperanza Araguz, one brother; Juan Araguz, and his first wife, Margaret A. Araguz. Services will be held on Wednesday February 16, 2022 at 2 pm at Wiederspahn-Radomsky Chapel. Interment with military honors will commence on Thursday at the Cheyenne National Cemetery at 10am.

The family of Florentino "Tino" Araguz created this Life Tributes page to make it easy to share your memories.

Send flowers to the Araguz family.