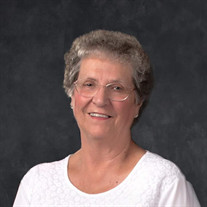 Ellen Valeria “Val” (Shimitz) Grimm was born February 19, 1938 to Sylvester and Ellen (Anderson) Shimitz in Cheyenne,Wyoming. Val’s childhood was spent living on the plains in eastern Cheyenne. She, her parents, and her sister Lois lived in one of the basement houses that littered the area, many of which are still lived in. Her mom (Ellen) told of a time when Valeria, her sister and other kids in the neighborhood had gone to Holiday Park pollywog catching, then tried to flush them down the toilet to keep from getting caught. Valeria enjoyed roller skating and would spend as much time as she could at Skate City. She would walk her father, who was blind, to the Wyoming capitol where he would lobby for rights for the blind. Valeria met her husband “Windy” after he returned from serving in Japan during the Korean War. They were married on July 3, 1954. They had six children, three boys and three girls. Valeria was a stay at home mom except for a period of time when she worked at the Owl Inn and an “in home daycare”, which she operated well after her own children were grown. Valeria was “mom” to as many as 30 children in her day care. Her daughter Linda once asked her how she did it (raised so many kids) and Val replied that after the first couple everyone takes care of each other. Val’s life with her husband and children was anything but dull. The family struggled financially like so many of their time but Val made sure that the children were happy and had what they needed. Windy liked to fish and Val became a proficient fisherman. She could be seen on the banks of Granite or Glendo Reservoirs with a toddler in one arm, a fishing pole in the other and fish bait in her pocket. Many times she had the biggest catch. When Windy and Val bought their first camper Val made sure it was stocked with everything necessary for a week-long adventure. The entire family spent many vacations traveling to various places and Val was prepared for whatever might occur, always excited to enjoy the adventure. After Windy retired from the Union Pacific Railroad Windy and Val became Snowbirds traveling south to the tip of Texas. Val was happy with this life but always looked forward to coming home to her children, grand children, and friends. After Windy and Val reached the age where traveling south was difficult they sold their motor home and moved in to a condo unit at the Landmark in Cheyenne where they quickly became a part of the community. Valeria moved to the home of her daughter Arlene in October of this year. Valeria is survived by three children Linda (Jim) Savell, Raymond (Deanna) Grimm, and Arlene (David) Flood, 16 grandchildren, 28 great-grand children, and three great great grandchildren, and her sister Lois (Shimitz) Olson. She was preceded in death by her husband Windy, of 65 years, and three children, Wendell (Little Windy), Bryan, and Robin (Grimm) Jones, and her parents. Services will be Thursday, 2:00 p.m., at Wiederspahn-Radomsky Chapel.

Ellen Valeria &#8220;Val&#8221; (Shimitz) Grimm was born February 19, 1938 to Sylvester and Ellen (Anderson) Shimitz in Cheyenne,Wyoming. Val&#8217;s childhood was spent living on the plains in eastern Cheyenne. She, her parents, and her sister... View Obituary & Service Information

The family of Ellen Valeria "Val" Grimm created this Life Tributes page to make it easy to share your memories.

Send flowers to the Grimm family.