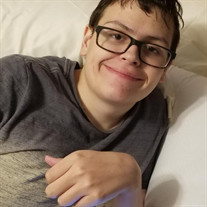 Elijah Conner Norris, 16, of Cheyenne, WY died on May 1st at Davis Hospice Center. Eli was born on January 12, 2005 in Cheyenne to Steven and Jordan Norris. He was a lifelong resident in Cheyenne. He was the middle child of three brothers and the house was filled with the lives of boys: bicycles, Legos, video games, a fort in the back yard, Halloween super-hero costumes, helmets, skates, bats, balls, and scooters. Eli started his school life at Baggs Elementary then McCormick Junior high. He longed to be an active student at Central High school but was diagnosed with cancer one week into his freshman year. The student body and staff never neglected him, however. There were numerous cards and gifts, as well as a nomination for Homecoming King from Central during his illness. Although a regular school life was not to be for Eli, he found new friends at Children’s Hospital in Denver. He became a favorite patient there on the seventh floor and claimed it was always because he shared his snacks with the staff! (A tradition he continued for the nursing staff at Davis Hospice.) Among the things that Eli loved were family, dogs, his guitar, his amazing Lego creations, (the harder the better!) friends, and the hot tub in the back yard. He was an avid traveler, from Estes Park to visiting his aunts in South Dakota, to visiting with his brother at the Marine base in Maryland, as well as the beach in South Carolina. Eli is survived by his mother; Jordan Norris; his older brother Ethan Horsley and youner brother Christian Norris, and sister; Taneesha Berman, his paternal grandparents, Bob and Judy Norris and adopted grandmothers, Sheila Stevens and Virginia Price, Aunts; Micki Amundson, Margaret Little, Amy Lara, his father's sister Robin Papaleka. These aunts(along with their (spouses) gave Eli six cousins who range in age from 17 to 3.He is also survived by very special friend, Ethan Sutton who spent many weekend with Eli in Denver, at his home in Cheyenne, and finally at Davis Hospice. He is preceded in death by his father Steven Norris and his maternal grandparents. Services will be held at Calvary Chapel on Friday May 7th at 2pm, with burial at Beth El Cemetery. Visitation is Wednesday and Thursday from 9-5pm, with Friday from 9-12pm. Those who bought “Team Eli” shirts to help provide finances for his illness might consider wearing them at the service. In lieu of flowers, memorials can be sent to Jason’s Friends at 340 W. B Street Suite 101 Casper, WY 82601. Expressions of care can be sent to www.wrcfuneral.com.

Elijah Conner Norris, 16, of Cheyenne, WY died on May 1st at Davis Hospice Center. Eli was born on January 12, 2005 in Cheyenne to Steven and Jordan Norris. He was a lifelong resident in Cheyenne. He was the middle child of three brothers... View Obituary & Service Information

The family of Elijah Conner Norris created this Life Tributes page to make it easy to share your memories.

Send flowers to the Norris family.