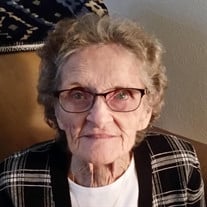 Eleanor B. Streit, 87, of Cheyenne, passed away peacefully at home on March 29, 2022. She was born on September 8, 1934, near Grainfield, Kansas to Leo and Rose (Dreiling) Wolf. Eleanor was raised on a farm in northwestern Kansas. She married Duane Streit on October 15, 1951 in New Almelo, Kansas at the early age of 17. They celebrated their 60th wedding anniversary just months before her husband passed away. They made their home in Norton, Kansas prior to moving to Cheyenne in 1964 where they spent the remainder of their life. Eleanor was a homemaker and her house was always immaculate. She enjoyed reading, especially about the Monarchy, doing word puzzles, crocheting, shopping and watching the various species of animals that roamed the hills near their country home. She especially enjoyed traveling with her husband including trips to Hawaii, Mexico, the Caribbean, London and various other places in the U.S. An especially enjoyable trip later in life was with her sister Tillie Keith when they took a thrilling helicopter tour of Kauai. Eleanor was a member of St. Mary’s Cathedral. She is survived by two daughters, Sharon Garland and husband Wade Ettleman, Cheyenne, Kathy and husband Rick Sproul, Dumont, Colorado, one son, Tim Streit, Denver, Colorado; two sisters, Matilda Keith, Hill City, Kansas and Donna (Joe) Scott, Healy, Kansas; three grandchildren Andy (Kristina) Sproul, Annie (Nick) Carlson, and Chanda (Travis) Spears; six great-grandchildren Mya, Lily and Violet Sproul, Ellieanna Carlson, Kai and Kelland Spears; Brothers-in-law, Joe (Mary) Streit and Jim (Deanna) Streit, numerous nieces and nephews and special friends, Peggy Hennig and Jo Hessig. Eleanor was preceded in death by her parents, husband Duane Streit, brother Robert Wolf, sisters Jean Nickelson and Arlene Flagg, brothers-in-law Randy Nickelson, Vic Flagg, Everette Keith, Vic Streit, Adrian Streit and Eugene Streit, sisters-in-law Gwendolyn Bruggeman, Pat Streit and Gloria Streit. Visitation and Rosary will be held on Monday, April 4th at 6 pm at Wiederspahn-Radomsky Chapel. Funeral Liturgy will be held on Tuesday at 1:30 pm at St. Mary’s Cathedral, Burial to take place at Olivet Cemetery. In lieu of flowers, donations can be made to the American Heart Association, St. Mary’s Catholic School, or charity of your choice.

Eleanor B. Streit, 87, of Cheyenne, passed away peacefully at home on March 29, 2022. She was born on September 8, 1934, near Grainfield, Kansas to Leo and Rose (Dreiling) Wolf. Eleanor was raised on a farm in northwestern Kansas. She married... View Obituary & Service Information

The family of Eleanor B. Streit created this Life Tributes page to make it easy to share your memories.

Eleanor B. Streit, 87, of Cheyenne, passed away peacefully at...

Send flowers to the Streit family.