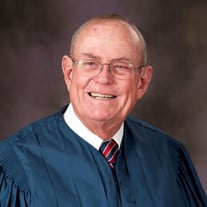 Edward Lee Grant, 80, passed away at home on August 26, 2020, surrounded by his family. He was born October 14, 1939, in Cheyenne, to Mary Ethel (Beaudoin) and James “Blackie” Grant. He graduated from St. Mary’s High School in 1958 and after working for Lock Joint & Pipe Company, he saved enough money to attend college in Laramie at the University of Wyoming where he graduated with a degree in History, and later, from the College of Law. Ed was a much-beloved attorney who began his legal career serving un-der the late Hon. James E. Barrett at the Wyoming Attorney General’s Office, and from there he entered private practice with Osborn, Grant & Grant and worked part-time as a prosecuting attorney; he then served for nearly 25 years as a State District Court Judge, and following his retirement from the bench, he continued his public service as the Director of Wyoming State Lands & In-vestments; and finally, was Of Counsel with Hathaway & Kunz. He was a re-markably kind and thoughtful jurist, whose intellect was matched only by his wit. Ed’s great love was his wife of 52 years, Dee Grant, who he said he had to “import from North Dakota.” Together, they raised two children: Leigh Anne Grant Manlove (Cole) of Cheyenne and Thomas Kertz Grant (Julia) of Boise, Idaho. He was his grandchildren’s biggest fan, and his story telling of their adventures and mischievousness were shared with great delight. Keenan and Conor Manlove; and Edward, Louis, Beatrice and Theodore Grant will miss him terribly. Their Papa was an extraordinary but humble man. He was a devoted husband, father, and grandfather, and he was also a true Wyoming son who was a member of numerous civic organizations, includ-ing: Young Mens’ Literary Society, the Laramie County Bar Association, the Wyoming State Bar, American Inns of Court, American Association of Attor-ney Mediators, Kiwanis, Cheyenne Frontier Days Heels, National Street Rod Association, and the Oak Spokes Antique Car Club. He was a man of faith and a member of Holy Trinity Catholic Church. He served in the Wyoming Air National Guard between high school and college and was a Pokes fan to the end. Ed loved cars and restored several; he sometimes drove them too fast, and rode his bicycle too fast, but he always lived life to the fullest. Ed is survived by his beautiful and singularly-devoted wife, Dolores A. Grant, their children Leigh Anne and Thomas, and their families; his brother Joe (Pat) Grant, sister Mary Ann Grant (Harry Panos), sister Pat Lyon (Tom Krell), sister Chris Grant, all of Grand Junction, Colo., and brother Mike (Kris-tin) of Utah. He was predeceased by his brother, Jimmie Grant, who died in 1937 at the age of 2. Ed is survived by numerous friends and colleagues; whose lives are the richer for “The Arrow” being in them. Ed’s request was that no rosary vigil be held, and due to COVID-19 re-strictions his internment and funeral mass will be limited to family. Those who wish may make a contribution in lieu of flowers to the Greater Cheyenne Greenway Foundation, whose efforts made possible one of his most-favorite places to ride his bike. Please think of him every time you enjoy it. Family condolences may be sent to P.O. Box 2935, Cheyenne, WY 82003-2935. “All I ever wanted to do was go to college, become a lawyer, marry a beautiful woman, raise wonderful children, enjoy good friends and own one or two fast cars,” Ed wrote in his 50-year high school reunion memory book. “By God’s grace, some work, and a little luck, I’ve been able to do it all. I shall be forever grateful,” he said. And so are we all.

The family of Edward L. Grant created this Life Tributes page to make it easy to share your memories.

Send flowers to the Grant family.