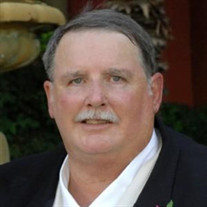 Ed “Corky” Dimon, II, 68, of Cheyenne, died on October 18, 2020 in Loveland, Colorado. He was born on September 26, 1952 in Cheyenne. Corky was a man who loved his family and the outdoors. He was an avid hunter and fisherman who shared his passion and skills with many. He was also known as “The Bear”. His granddaughter brought him delight and was the ‘apple of his eye’. His children and wife’s safety and happiness were his #1 priority. He was passionate about his service as a volunteer firefighter with Laramie County Fire District 2 and a member of the Laramie County Dive Rescue. He was an EMT II, Firefighter II, and owned and operated Iron Mountain communications. He was a man who would fix or build anything, making him a combination of MacGyver and Tim ‘The Toolman” Taylor. He was a competitive trap shooter and former director of the Cheyenne Trap Club. He loved to cook for family and friends. He shared his knowledge and love of the Wyoming mountains with his children teaching them survival skills while a love of being outdoors. He served with the Wyoming Air national Guard. He is survived by his wife, Terry Dimon; daughter, Kathleen “Kat” Dimon; son, Kristopher Dimon (Lauren); and his granddaughter, Lily Dimon. Ed was preceded in death by his father, Edsel Dimon, I; his mother, June Dimon Ford; grandparents, George and Verda Dimon; and a sister, Carol Ann Rowland. Pall Bearers will be Bob Sommers, David Ailes, Scott Maddison, Ken Tooke, Dan DeShaney, Larry Jay, and Gary D’Spain. Services will be Saturday, 2:30 p.m., at Wiederspahn-Radomsky Chapel. The family encourages well-wishers to utilize the live webcasting of the services by visiting his obituary page at www.wrcfuneral.com. The family wants everyone to be safe and comfortable in these uncertain times. Those who chose to attend the service in-person are kindly requested to wear a mask at all time and respect social distancing as possible. Friends who wish may contribute to K9’s for Mobility, Shriners Children’s Hospital, or the charity of their choice.

The family of Edsel K. "Ed" "Corky" Dimon II created this Life Tributes page to make it easy to share your memories.

Send flowers to the Dimon family.