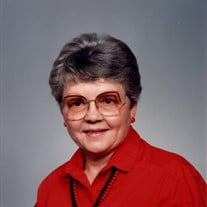 Dorthy Irene (Reed) Bengston, 94, of Cheyenne, Wyoming passed away June 26, 2021 in Cheyenne at her daughter’s home where she’d been living for the last year. Dorthy was born May 22, 1927 in Ogallala, Nebraska to Gladys Viola (Stone) Reed and Frederick John Reed. At the age of 9 months, her father took a job at the iron mines in Sunrise, Wyo. The family moved to Hartville where a sister and brother were born. In later years, the family moved to company owned housing in Sunrise. Dorthy completed 9 years of school in Hartville and then moved to Cheyenne in 1942 where her youngest sister was born. In later years, she graduated from the American School by Correspondence. Dorthy married Robert “Bob” Donald Bengston on July 14, 1945 in a “furlough wedding” while he was home on leave from the Merchant Marines. They were married 75 years before Bob’s death in 2020. They lived in Pine Bluffs and Kansas for a short time, eventually settling in Cheyenne where they raised their son and daughter. Dorthy and her husband were charter members of Grace United Methodist Church. She was also a charter member of Cheyenne Heritage Quilters. Many quilts were made for the Linus Program (200+), church programs, gifts and special quilts for family members. She worked different jobs throughout the years but her main goal was being a good wife, mother, grandmother and great-grandmother. She leaves a legacy of love to all of them. Dorthy is survived by son, Bob (Louise) Bengston of Littleton, CO; daughter, Becky (Dennis) Brosius of Cheyenne; grandchildren: D’Ette Brosius of Nashville, TN, Eric (Dustin Wesley) Bengston of Los Angeles, CA, Mari Bengston of Littleton, CO and Andy (Jenn) Bengston of Littleton, CO; and great-grandchildren: Alton, Amarrah, Zane & Adler Brosius and Ali & Lizzi Bengston. She is also survived by granddaughter-in-law, Tracy Brosius of Cheyenne, honorary daughter Jeanne (Dan) Douglas and their sons (and families) Garrett & Alex Douglas of Willcox, AZ and many nieces and nephews. She was preceded in death by her parents, husband, grandmother Zella Skidmore, grandson Kevin Brosius, and siblings Alice Parker, Jim Reed and Joan Wells. In place of flowers, Dorthy requested donations be made to the Cheyenne Botanic Gardens or charity of their choice. Graveside services will be Thursday, 2:00 p.m., at The Rugged Cross Chapel in Cheyenne Memorial Gardens.

The family of Dorthy Irene Bengston created this Life Tributes page to make it easy to share your memories.

Send flowers to the Bengston family.