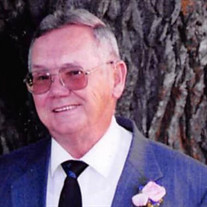 Donald Edgar Orr, 91, of Cheyenne, passed away surrounded by his loving family. He was born September 10, 1930 in Hublersburg, Pennsylvania to Leo and Mary (Neidigh) Orr. Don graduated from Bellefonte High School in 1950. While there he found his love for the military, attending ROTC. After graduation he joined the Army and served in the Korean War. Don also started out setting type for the newspaper in Bellefonte. He was always interested in entrepreneurship and had a rubber stamp business early on. He also had an import and export business all while still working at the newspaper. When he retired he bought a greenhouse and sold wholesale carnations for a number of years. He always loved working with flowers. His hobby was model trains which he had for years and built elaborate towns with a firehouse, houses, people, apple trees, etc. In 1978 he found the Lord and served him faithfully the rest of his life In 2000 he married his wife Phyllis, and they lived a life of travels and family and church get togethers until his passing. He and Phyllis also liked to travel and went to Hawaii and the Ukraine. Don is survived by his loving wife, Phyllis; children, Deborah, Kansas, Sharon (Rick), Arizona, Don, Jr., New Mexico, Shaleen, California, Valerie, California, Cheryl, Colorado, Ranee, Oregon, Deb (Jerry), Nebraska, David (Laura), Wyoming, Dan (Pam), Wyoming; multiple grandchildren, great-grandchildren, and even a great-great-grandchild; along with many nieces and nephews. Don was preceded in death by his parents Mary and Leo; sister, Anna Mae; and brother, Richard. Visitation is Monday from 12:00-3:00 PM. Service will be held at 10:00 a.m., Tuesday, in Wiederspahn-Radomsky Chapel. Reception to follow the service with interment happening at 2:00 p.m. in Foothills Memory Garden in Longmont, Colorado.

Donald Edgar Orr, 91, of Cheyenne, passed away surrounded by his loving family. He was born September 10, 1930 in Hublersburg, Pennsylvania to Leo and Mary (Neidigh) Orr. Don graduated from Bellefonte High School in 1950. While there he found... View Obituary & Service Information

The family of Donald Edgar Orr, Sr. created this Life Tributes page to make it easy to share your memories.

Donald Edgar Orr, 91, of Cheyenne, passed away surrounded by...